In a first, Kaaba gets new cover in the month of Muharram 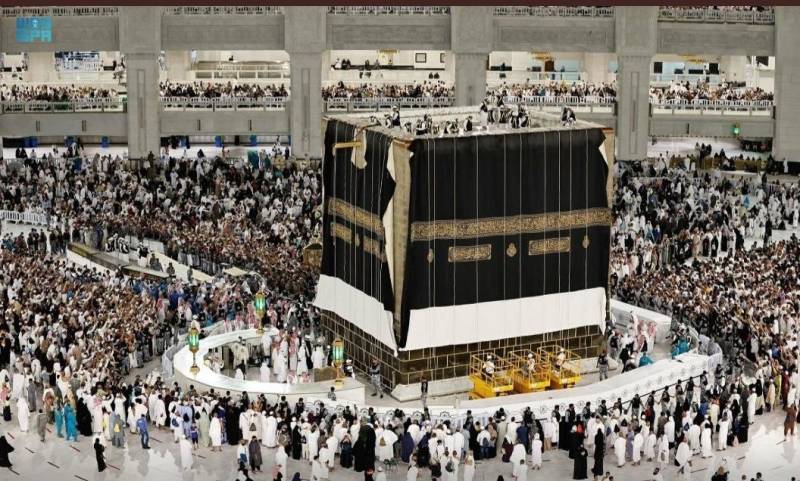 MAKKAH – In accordance with the annual tradition, the cloth of the Holy Kaaba, Kiswa, was replaced by the staff of the General Presidency for the Affairs of the Grand Mosque and the Prophet Mosque on Saturday, at the start of new Islamic year.

It is for the first time that Kiswa was replaced on the first of holy month of Muharram as it used to be installed on the morning of Dhul Hijjah 9 during Hajj.

The replacement of the Kaaba's Kiswa was carried out by a team selected from King Abdulaziz Complex for Holy Kaaba Kiswa, as the team began to dismantle the old Kiswa with the new one.

The official SPA news agency described the process as, “The new kiswa consisting of four separate sides and the door curtain. Each of the four sides of the holy Kaaba was raised separately to the top of the Kaaba in preparation for its unfolding on the old side, and fixing the side from above by tying it down and dropping the other end of the side, after the ropes of the old side were loosened. By moving the new side up and down in a permanent movement, then the old side fell from below and the new side remained, and the process was repeated four times for each side until the dress was completed, then the belt was weighed in a straight line to the four sides by stitching it”.

The number of pieces of the Kiswa belt of the holy Kaaba is 16 pieces, in addition to six pieces and 12 lamps at the bottom of the belt.

The new cover consumed about 850 kg of raw silk, which was dyed black inside the complex, 120 kg of gold wire, and 100 silver wires.

About 200 professional workers and administrators took part in the preparation of the holy cover at King Abdulaziz Complex for Holy Kaaba Kiswa.