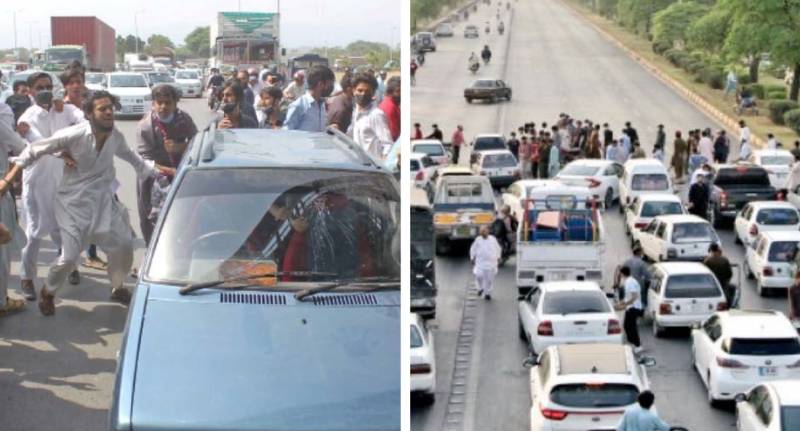 ISLAMABAD – Board students protesting against physical examinations clashed with the federal law enforcers at the Faizabad area of Islamabad on Saturday.

Reports in local media suggest that police apprehended scores of agitating students while dozens of motorcycles impounded during the clash as students staged a protest demanding online examinations.

Amid the protest, students also blocked the Islamabad Expressway due to which traffic halted for hours. They also damaged vehicles and set trees on fire following which the cops launched a baton charge and fired tear-gas shells to disperse the protesters. They even retaliated and pelted the police with stones.

The agitating students cited that they were forced to take online classes for the whole academic session owing to the Covid pandemic. Adding that, the government should revoke its decision of conducting physical examinations for the annual board exams.

In the clip posted on social media, protesting students can be seen chanting slogans against the authorities.

Students gathered for their cancellation of exam in Capital.#CancelExamsSaveLives pic.twitter.com/MAKYoLLC8O

Meanwhile, police officials claimed that the arrested person failed to prove that they were students and enrolled in any educational institutes. The detained persons are miscreants who joined the students’ groups to challenge the administration.

LAHORE – The Punjab department of higher education Wednesday finalized the schedule for matriculation and ...

Following the whole episode, Human rights activist Jibran Nasir along with others expressed concern over videos of teargas being fired on protesting students as well as reports of a police baton charge.

After Lathi Charge on Students in #TaunsaSharif, shelling done on students at #Faizabad interchange. Has the Govt lost its mind? These are #Board inter matric students, which means a vast majority of them is under 18, they're minors. You're Govt is beating up minors @ImranKhanPTI pic.twitter.com/zRY9HQnNQr

Progressive Students Collective while expressing solidarity with the students said ‘We call on activists, journalists, and citizens to join us holding the government responsible for its crimes against students. We demand a new education package in response to the pandemic that starts with ensuring student’s representation in campus decision making’.