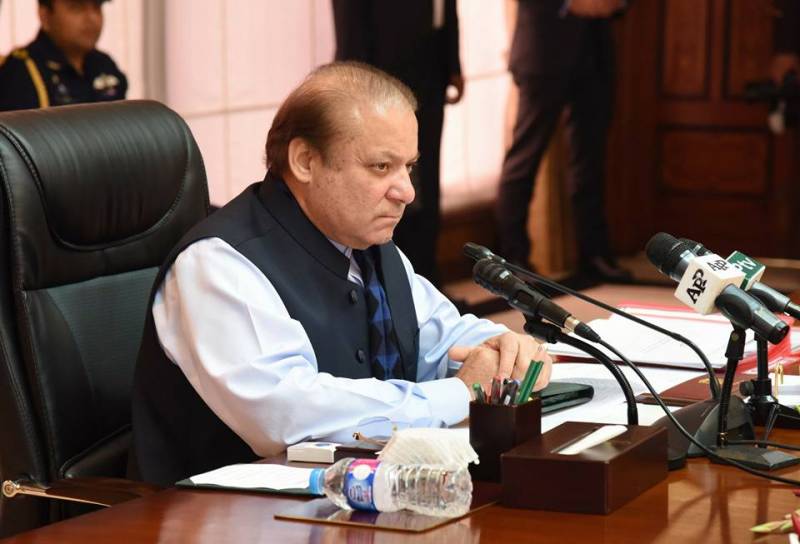 During the meeting, the Prime Minister reiterated that no region or territory must be left behind in reaping the benefits of CPEC.

The meeting reviewed at length the benchmarks set for numerous energy, transport infrastructure and industrial projects in terms of deliverables with particular focus on development of Gwadar Port along with socio-economic uplift projects in Gwadar.

Prime Minister Muhammad Nawaz Sharif said that Pakistan’s economy was in shambles in 2013 when the present government came into power; it was China that supported and helped us in the economic revival at such crucial juncture for which the government and people of Pakistan are indebted to the Chinese leadership and people of China.

The visionary Chinese leadership supported us in translating the idea of CPEC into reality, the Prime Minister expressed. Recalling his first official and landmark visit to China in July 2013, the Prime Minister said that the visit marked a new phase in the development of the bilateral relationship by putting economic cooperation and connectivity squarely at the centre of the bilateral agenda.

While highlighting the significance of CPEC, the Prime Minister said that CPEC is Pakistan’s strategic economic initiative that has been significantly attracting the world in general and regional countries in particular.

‘CPEC has changed the negative security narrative into an exceedingly positive economic narrative for Pakistan. The successful implementation of the projects under the umbrella of CPEC is a manifestation of the strong and time-tested friendship between China and Pakistan; the success of CPEC has been substantiated by the massive and further expanding foreign investment in Pakistan. There is a compelling reason for international investors for investments in Pakistan because of the success story of CPEC initiatives’, said the Prime Minister.

The meeting was briefed that Energy projects under the CPEC including Coal, Hydel, Wind, Solar as well as transmission lines are on track. The participants of the meeting were briefed on the status of each and every energy project under CPEC in terms of timelines, transparency and cost effectiveness.

Besides, infrastructure projects including Road, Rail, Aviation and Data Connectivity are also being executed simultaneously on fast track basis. The meeting was informed that Early Harvest projects under the CPEC will be completed by 2017-18.

The meeting also deliberated at the multiple passages of CPEC across the length and breadth of the country.

It was emphasized that local population must be given priority while giving incentives for industries. The participants of the meeting were apprised of the recent developments and progress to boost industrial cooperation between China and Pakistan.

The meeting was also briefed on the steps already in place for the safety and security of Chinese workers working on CPEC Projects. Long Term Plan, energy cooperation, transport infrastructure and industrial cooperation in the long term was aslo reviewed during the meeting.

Our endeavours have started yielding substantive results; our continuing efforts in the completion of CPEC projects will InshaAllah transform the socio-economic landscape of Pakistan where no one will be left behind in getting the multiple benefits, the Prime Minister stated.

China has proven to be real friend of the people, State and the government of Pakistan. The energy projects under CPEC have provided an impetus to the energy roadmap of the country by initiating various energy projects’, added the Prime Minister.