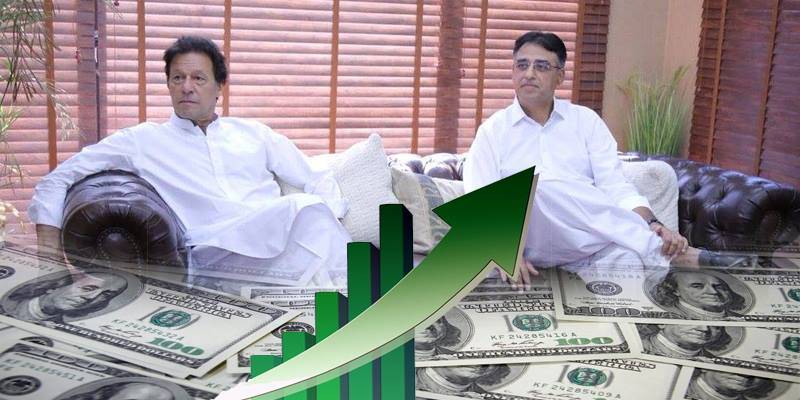 KARACHI - The US dollar hit an all-time high of Rs142 against the Pakistani rupee in the interbank market on Friday.

Dollar gained Rs8 (a five percent increase) to touch the new high in the interbank market, a day after the ruling regime highlighted its steps taken in the first 100 days; the dollar stood at Rs 134 when the market closed on Thursday.

According to economic experts, the spike in dollar comes owing to the widening current account deficit and International Monetary Fund's (IMF) suggestion to realign the rupee with market fundamentals to access funds.

The State Bank of Pakistan is set to announce its monetary policy today and the market expects an increase in the interest rate which could have an effect on the dollar rate as well. The current policy rate is 8.5%.

With the latest devaluation of rupee, the total debt owed by Pakistan has spiked by another Rs760 billion.

The rupee has depreciated by a massive 36% against the dollar over the past 12 months.

The increase in Dollar price comes a day after Prime Minister Imran Khan highlighted his successes achieved in the first 100 days of incumbent regime saying, Pakistan's best days lie ahead.

Addressing the audience at the Convention Centre in Islamabad, the 66-year-old lavished praise on his wife, Bushra Bibi and credited her for the performance of his government as he took only one day off during the entire period.

“I was sworn in as your prime minister at a testing time, with a weakening economy and depleting trust in the system. This made planning our journey towards a transformed and elevated Pakistan all the more difficult. Yet we persevered, and will continue to persevere,” he added.

On the occasion, Finance Minister Asad Umar expressed that the government was exploring alternate channels instead of solely relying on the International Monetary Fund to plug the financing gap.