‘Agreement reached’ after successful negotiations between govt and TLP

Agreement details to be revealed at 'appropriate time' 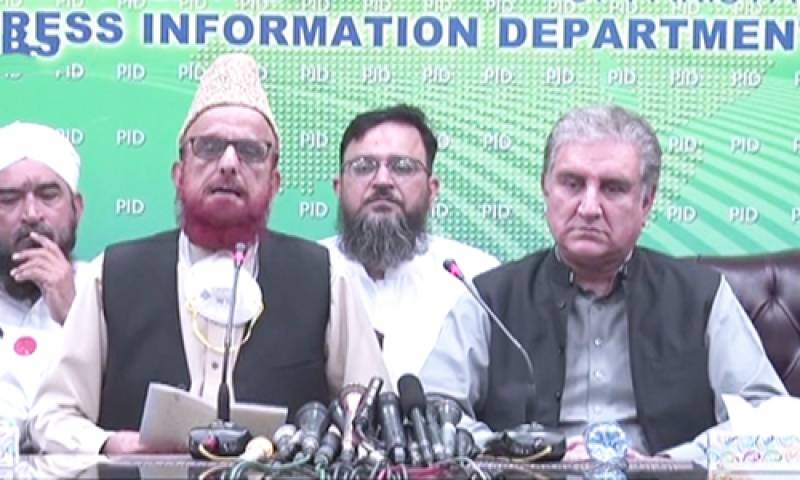 ISLAMABAD – The talks between the government and the banned Tehreek-e-Labbaik Pakistan have reached a positive conclusion, said Mufti Muneeb-ur-Rehman.

Mufti termed the development as the victory of Pakistan, Islam, patriotism, and the security of the nation saying ‘this is not the win or loss of anyone’.

Delving into details, he said an agreement has been reached after a detailed discussion under the environment of mutual trust between both sides. Adding that the negotiations with the banned outfit were not held under any pressure but in a responsible and independent environment, in which everyone made their contribution.

However, the noted scholar didn’t reveal the in-depth details of the accord, saying those details will be shared at an ‘appropriate time’.

He also mentioned that the ‘positive impact of the development would be visible in the near future, as the treaty was made in the line with the nations' interest. He mentioned that both sides reached a peaceful conclusion before any troublesome incident.

He also commended Prime Minister Imran Khan for empowering the committee members and trusting them. Similarly, the right-wing party also acted in a responsible manner, he said while adding that the agreement was also backed by TLP leader Saad Rizvi.

Mufti also revealed that a committee has been established to oversee the matter. PTI Minister Ali Muhammad Khan Law Minister Punjab Raja Basharat will be a member of the committee and Mufti Ghulam Ghous Baghdadi and Hafeezullah Alavi will represent the banned outfit in the committee.

Meanwhile, the much-awaited presser was delayed as some members of the TLP central committee were on their way to the federal capital.

On the other hand, TLP activists, who are currently near Wazirabad are waiting for orders from their top command.

The issues between the incumbent authorities and the banned outfit have been settled, and agitators protesting on GT Road for the last week will end their sit-in, while the administration will release arrested workers after completion of legal requirements.

Prime Minister Imran Khan on Saturday said that it would be appreciated if religious scholars played the role to defuse unrest, as he did not want bloodshed but insisted there could be no compromise on the country’s security and the government writ.

Khan emphasized that peace and security are in the public interest and so the religious scholars called for negotiations.

During the meeting, Prime Minister said that the expulsion of the French envoy is not the solution to any problem and he cannot be expelled while he contended that fighting with France can isolate Pakistan.

Khan said that the cases of Rizvi and others are pending in the courts. If the court releases Saad Rizvi, they will have no objection.

PM told the religious scholars that they must convince the activists to refrain from bloodshed and not to resort to violence.

Earlier, it was reported that the delegation of religious scholars had refused to meet the Prime Minister in the presence of two federal ministers after which the prime minister directed them not to participate in the talks.

Tahir Ashrafi and Fawad Chaudhry cannot be seen in the footage released by the Prime Minister secretariat after the key meeting.

Any further breach of law by TLP to not be tolerated, warns NSC