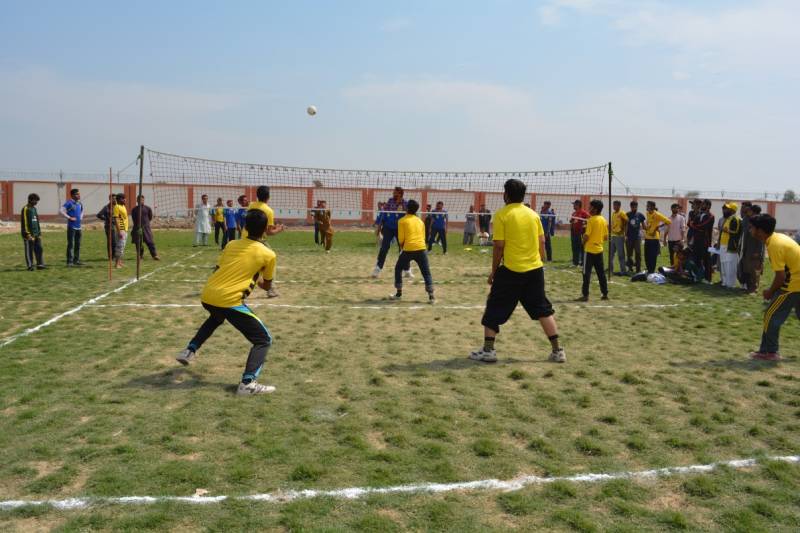 The Pakistani Nation has the potential to perform in every field of life. But instead of such potential, the outcomes are not satisfactory because of multiple identifiable lacking in policymaking and policy implementation especially in sports. No doubt, national sports bodies lack capacity and competence but the role of educational institutes like schools, colleges and universities in the promotion of sports is not satisfactory. A careful comparison of Pakistani universities with foreign universities candidly shows that a lot of improvement is required sports policy of our universities. With candid and concrete policy, universities also need funds to promote sports by providing suitable sports facilities. Sports may be the last in the priority list of university management. It needs serious attention because universities are like nurseries to provide sportsmen to the national bodies.  A proper vision, well-defined aims and elaborated objectives for sports policy is the need of the hour in higher education institutions in the country.

In the first quarter of 2020, Punjab Higher Education Commission established a committee to review and redesign the sports policy. It was hoped that the committee will identify the gaps in the existing policy. It will suggest best practices to the universities to organize their sports departments with proper facilities and qualified HR to produce elite sportspersons and to sever our national sports grid. A careful historical analysis proves that most sports were developed in educational institutions in the 19th century. First time in the history of sports, at Exeter College, Oxford in 1850, the undergraduates decided to adopt a steeplechase and used three feet six inches high agricultural hurdles for a race of 140 yards. The Harrow school in England invested heavily in extending their playing fields from eight acres in 1846 to one hundred and forty-six acres in 1900. The university colleges at Oxford and Cambridge did the same to promote sports. Pierre de Coubertin, the father of modern Olympics, drew heavily on the philosophy of English public schools and universities in drawing up his ideas for the revival of the Olympic Games. It is befitting that the discussion that the revived Olympics took place in June 1894 at the Sorbonne University of Paris. Thus the Olympic movement has its birth in one of the oldest universities in Europe.

It is the need of time that Pakistani universities should pay more attention and financial support to sports like physical sciences, humanities and social sciences. Recently, PHEC Sports Committee proposed that HEC must establish a centre of excellence where adequate research and development shall take place in the field of sports sciences, sport management and all allied areas. It is also suggested to develop a pool of qualified sports professionals and develop international linkages with renowned universities worldwide. If HEC develops a pool of high-performance athletes, capable of representing the country in international competitions then it would bring a revolutionary change in the sports paradigm in Pakistan. The committee suggested establishing a sports directorate in each higher education institution to facilitate the sportsmen, building adequate facilities, increasing collaborations and generating funds. It is suggested by the committee to provide medical insurance with monthly scholarships to the deserving athletes so that they can meet their training expenses and tuition fee. It is the responsibility of HEC to monitor the development of sports facilities in all public and private universities. No doubt, the universities have the potential to prepare the sportsmen for national as well as for international sports events.

Newly established universities have fully engaged in the problems related to infrastructure development, service statutes, development of research facilities, transport, generation of funds and sustainability challenges. In such a hard scenario, it is difficult for universities to allocate suitable funds to develop sports facilities and to facilitate sportsmen. In such universities, commonly the sport's development has the least importance. Let us consider a newly developed public sector university, Khwaja Fareed University of Engineering and Information Technology Rahim Yar Khan as a case study. In first-quarter 2020, KFUEIT developed a sports policy under the leadership of newly appointed vice-chancellor Prof. Dr Muhammad Suleman Tahir. A sports directorate was established and skilful sports professionals were appointed as trainers. In the annual budget, suitable funds were allocated for sports development. The development of sports facilities is in transition. University announced sports scholarships and incentives to sportsmen to motivate the students and to attract sportsmen. At the start, the sports directorate focused on the athletics games and start the training of the students. After the hard work of a few months, KFUEIT athletics team participated in a tournament arranged by the District Sports Department and secured the first position with five gold, seven silver and five bronze medals.

Recently the athletics team of KFUEIT represented District Rahim Yar Khan in Commissioner Cup Sports Gala Athletics Meet 2020 and got 2nd position in the tournament with six gold, two silver and one bronze medal. It is a good strategy to train the sportsmen and test the preparation by participating in district or divisional level competitions. Now the sports team is preparing for the inter-universities championship and university management is confident to get prominent positions in the inter-university championship. No doubt, such outcomes are due to the improved sports policy in KFUEIT. It happened with the special interest of vice-chancellor because in his educational career he was an athlete. He participated in many national level sports events and he also won the title of the best athlete. His special interest and appointment of proper sports professionals revolutionized the sports paradigm in KFUEIT. Indeed, KFUEIT developed a good sports model and Pakistani universities would get benefit by considering the same policy.

Currently, Mr Muhammad Anwar Farooq is working as a lecturer in the department of humanities and social sciences, Khwaja Fareed University of Engineering and Information Technology, Rahim Yar Khan, Pakistan. He has fifteen years of teaching and research experience. Currently teaching Philosophy, History and International Relations. He is also the author of four books ‘Logic and Decision Making’, ‘International Relations: An Introduction’, ‘Economic Development in Pakistan’ and ‘Foreign Policy of Pakistan: An Introduction’. Fond of book reading, discussion and travelling. Also, love to write for newspapers and magazines.

The writer is working as a lecturer in the Department of Humanities and Social Sciences, Khwaja Fareed University of Engineering and Information Technology, Rahim Yar Khan, Pakistan. He can be contacted at anwar.farooq@kfueit.edu.pk.

The writer is working as a lecturer in the department of humanities and social sciences, Khwaja Fareed University of Engineering and Information Technology, Rahim Yar Khan, Pakistan. He can be contacted at ...

COVID-19 and funding for research to innovate Universities of Pakistan