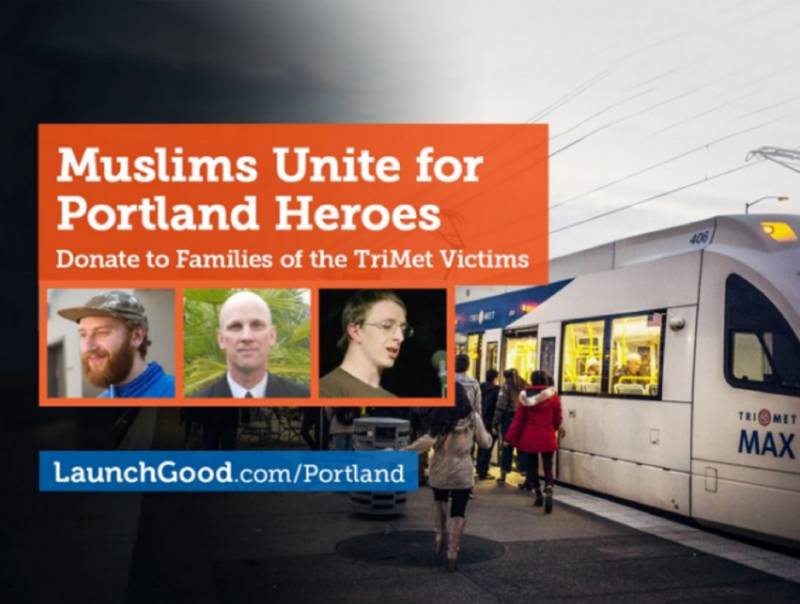 OREGON - In a matchless show of co-existence and humanity, Muslim groups have raised nearly half-a-million dollars for the families of the men killed in Portland, Oregon while trying to defend Muslim women from a racist attack.

Two teenage girls who were being racially abused on a train last week were defended by three men. Unfortunately, two of them, 23-years-old Taliesin Myrddin Namkai-Meche and 53-years-old Ricky John Best lost their life another man was left severely injured.

Soon after the tragedy Muslim groups Muslim Education Trust and CelebrateMercy, started a crowdfunding campaign for the victims in order to “respond to hate with love”.

The campaign generated funds swiftly. The initial target for the campaign set at $60,000 (£46,500) was raised in just five hours to cover the funeral costs for Mr Best and Mr Namkai-Meche.

After the target was achieved, the organisers decided to use the rest of the funds for long term expenses, such as supporting Mr Best’s four children through college.

The organisers said they were inspired by the teachings of the Prophet Muhammad, quoting a passage from the Qu’ran.

“Our Prophet Muhammad, peace be upon him, said: "Have mercy to those on earth, and the One in Heaven (God) will have mercy upon you." The Prophet's life exemplified that central commandment in the Quran: "Repel evil with that which is better" (41:34).

CelebrateMercy has also launched campaigns to repair Jewish cemeteries after multiple racially motivated attacks on tombstones across the US.

On the other hand, Asha Deliverance, the mother of Mr Namkai-Meche, has written an open letter calling on US president Donald Trump to address Islamophobia.

“You have said that you will be President for all Americans. So, I ask you Mr. President to take action at this time. Your words and actions are meaningful, here in America and throughout the world,” she wrote.

The survivor of the attack, 21 years-old Micah Fletcher released a video on Facebook and expressed that that he was grateful for all the support, raising voice for the girls as well.

"This is about them, that they are the real victims here as well," he said.

However, three men riding the same train tried to defend the women but Christian pulled a knife and stabbed all three men, killing two and leaving a third hospitalized.

Joseph was arrested but he continued his rant as he sat in the back of a police car and said: "I stabbed the two (expletives) in the neck and I'm happy now."

"I hope they all die. I'm gonna say that on the stand. I'm a patriot, and I hope everyone I stabbed died." he was recorded saying by the audio system of police car.

The alleged attacker, Jeremy Joseph Christian, 35 is charged with aggravated murder, among other counts.

The 35-year-old was known to be involved with white nationalist groups and was recently photographed at a recent alt-right protest giving a Nazi salute and shouting: “Die, Muslims!”