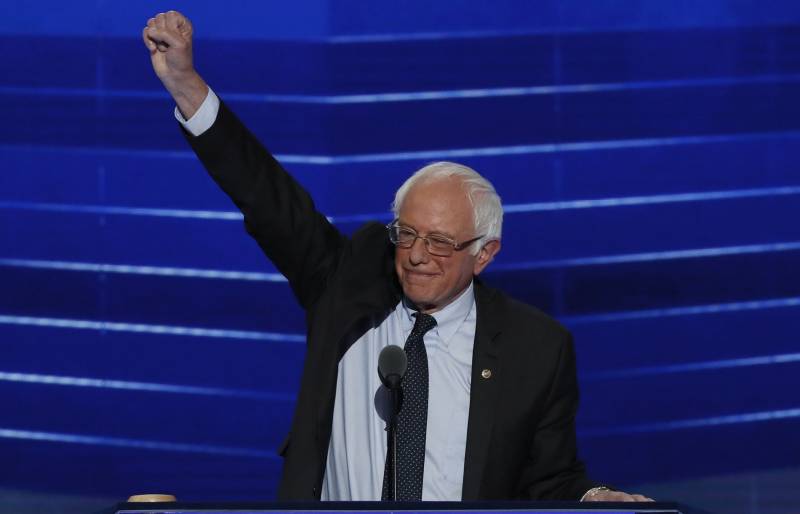 In 2016, an incredible competition took place in the Democratic Party presidential primaries which, in so many ways, transformed the American political culture, and injected into its corporate-worn limbs a fresh wave of democratic socialism and progressive thought. Bernie Sanders, a rather unknown senator from Vermont and a life-long independent, rose from obscurity and went on to challenge the might of Hillary Clinton, the former First-Lady, Secretary of State, and one of the most influential political figures in the United States.

In what shall be remembered as one of the bravest political campaigns in modern history, Sanders went on to win 23 primaries and caucuses, and 43 percent of the votes. His campaign was built on grassroots mobilization, small donations from hundreds and thousands of ordinary people, and rejection of large corporate funds. It is plausible to argue that he would have won the nomination had it not been for the Democratic establishment’s systematic intervention in the elections in favor of Hillary Clinton.

Bernie Sanders, despite this rigging on the part of the DNC and his consequent failure to win the nomination, was able to reinvigorate progressive politics significantly across the United States especially among the young people, and on campuses. His campaign made popular the demands for social security expansion, universal healthcare, free public high education, Wall Street reforms, protection of labor rights, reduced military expenditures, and the Green New Deal. He himself said that it was merely the beginning of a political revolution.

Sanders entered the 2020 presidential bid under remarkably different circumstances than those under which he set sail four years earlier. He was no more unheard of politician from a small, northeastern state with no organized political support and resources. Rather, Sanders was at the forefront of the race with global name recognition and approval from the left-leaning voices and had much more influence within the Democratic Party with figures like Alexandria Ocasio-Cortez, Ilhan Omar, and Rashida Tlaib devoted to his cause. His rallies drew far larger crowds than those of his opponents, and he went on to win various significant states. There was an intense feeling of a revolution happening all around, and a wide-spread hope that the centrist stranglehold which had seemed so eternal might, in fact, be coming to an end. And yet, Sanders eventually failed to win the Democratic Party nomination and ascend to the White House. In the midst of the fright caused by the Covid-19, he suspended his campaign, clearing the way for Joe Biden to win the Democratic nomination and face Donald Trump in November. It was utterly heartbreaking, to say the least.

One can put forward a multitude of explanations for Sanders’ failure to win the nomination; internal divisions on various campaign policies, Elizabeth Warren’s political position, the hostility of corporate media, and the opposition within the Democratic Party establishment. Many have argued how Sanders tried to win fair and square and was unwilling to launch a counter-offensive against Biden and the corporate media. The entire exercise has also highlighted the flaws in the electoral system of the party and the lack of real democracy with the involvement of large corporate funds and the party bureaucracy’s undermining of Sanders’ campaign.

However what the real lesson that the left can draw from Sanders’ fall is the structural incapacity of the centrist parties to deliver on a progressive dream in terms of favorable results for insurgent, left-wing politics. Sanders had hoped to reform the Democratic Party and turn it into a social-democratic party. That, however, was not possible without a direct confrontation with the DNC and the fundamental shifting of the relations of power within the party. If anything, it was clear throughout the Democratic primaries that the bureaucracy of the Democratic Party preferred Donald Trump in the White House than having “a crazy socialist” ascend to the presidency. And this is exactly what happened last year in Britain, where Jeremy Corbyn’s defeat to Boris Johnson in the general elections was widely celebrated by the dominant centrist elements of the Labour Party.

This is not a new phenomenon. The centrist parties have a long, ugly history of supporting the neoliberal paradigm and standing with the conservatives on various political questions. Tony Blair was instrumental in carrying forward the torch of Thatcherism in the UK, and so was Barack Obama in giving bailouts to the big banks and corporations after the financial crisis of 2008. The reliance on the centrist parties for a transformational, left-wing political revolution no longer seems to be a viable solution. If anything, it would be the greatest suicide in history if the left continues believing in centrist parties especially in these times when the right-wing populism is on the rise and knows how to capitalize on the discontents of neoliberalism.

Further, while the left has increasingly invested itself in cultural questions of race, gender, and so on, it has been unable to figure out how to reconcile class politics with identity politics. Bernie Sanders managed to do well on the issues of class but the so-called liberal leftists and multiculturalists, who stood with Warren, made things way more difficult. And when he tried to win over these segments, he ended up losing popularity among many of his earlier voters from the working classes. Corbyn had faced similar problems in appeasing liberals, and the center-left. This is why the left needs to work out a solution on its approach toward identity politics and the emergent woke culture because both end up dividing its vote bank and alienating it from the masses.

Sanders’ revolution, however, shall live on. His failure to win the nomination in no way means that his ideas and political vision won’t survive. His experiment has pushed the leftist ideas into the mainstream of a political culture that had long tabooed socialism in all its forms and manifestations. While imagining various alternatives, it has raised new questions about the future of democratic socialism and the intellectual preparedness of the 21st century left in posing a systematic challenge to the alliance of capitalism and liberal democracy.

Finally, and most importantly, the 78 years old man, who was largely rejected by the voters of his own generation, succeeded in inspiring millions of young people to fight for a just world, build on solidarity in the face of xenophobic and greedy politics and, as Lord Tennyson, the Victorian poet laureate, says in the Ulysses, continue “to strive, to seek, to find, and not to yield.”

The writer is a student of English Literature at Government College University Lahore.