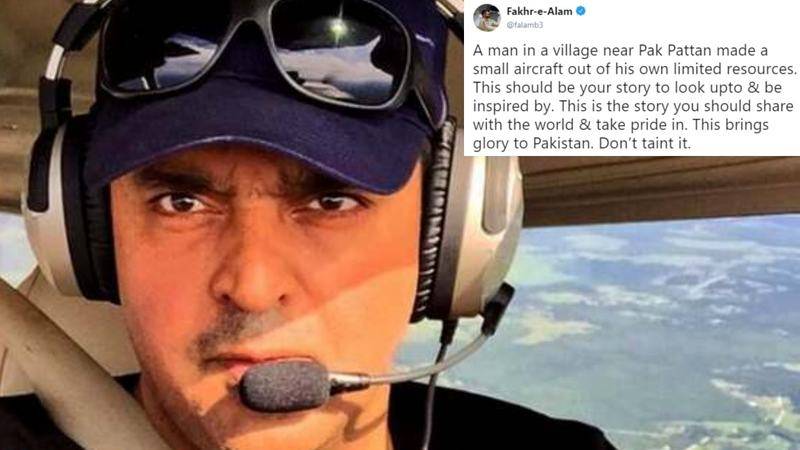 In a series of tweets, Alam, who became the first Pakistani to fly across the globe, defended the man saying he was our hero and should be encouraged.

“This man is a HERO. Anyone trying to justify his arrest & remand on my timeline will not get any kind words from me. Yes CAA has regulations but this is an extraordinary story & this man needs to be groomed & encouraged & helped to comply with law & asked to innovate more,” he tweeted.

FLORIDA - Pakistani singer and activist Fakhr-e-Alam touch down in Florida in the early hours of Sunday morning to ...

“Dear PM @ImranKhanPTI can you please tell your Punjab govt to intervene. This man should be interviewed & asked what made him do this & how he succeeded. This man should be treated as a national asset. These are the kind of stories that inspire youth & future aviators,” Alam further added.

ISLAMABAD - Fakhr-e-Alam has a perfect comment to an Indian air strike in Pakistan Kashmir that soon returned back ...

“This young man deserves our appreciation and respect. Pakistan cannot be a country where technology & innovation is punished. He should be lauded & I would like to fly with him in his homemade aeroplane. Anyone wants to arrest me please do I will surrender myself. Pathetic.”

Here are the posts by Fakhr-e-Alam:

This man is a HERO. Any one trying to justify his arrest & remand on my time line will not get any kind words from me. Yes CAA has regulations but this is an extrabordinary story & this man needs to be groomed & encouraged & helped to comply with law & asked to innovate more. pic.twitter.com/reJxUXOQsy

A man in a village near Pak Pattan made a small aircraft out of his own limited resources. This should be your story to look upto & be inspired by. This is the story you should share with the world & take pride in. This brings glory to Pakistan. Don’t taint it.

I beg of all Pakistanis to stop looking at everything through the spectrum of POLITICS. Issues need to be addressed regardless of political parties & governments. We cannot continue to live in a world of political legacies & dynasties. We must ask real Qs & find answers.

Pakistan is late on science & technology. Our education system is terrible. Private sector flourishes as education like health is a business rather than a public service. We MUST always go out of our way to support, encourage people daring to innovate or explore in STEM.

Fayyaz was being arrested for flying his manufactured aeroplane without official permission in Punjab’s Arif Wala Tehsil, Police said on Monday (yesterday). His aircraft has also been confiscated during the trial run at an open field, police report added.

Muhammad Fayyaz, who is a security guard by profession, has manufactured a small aircraft with the help of bank loan, and personal savings of Rs50, 000.

Fayyaz while talking to Geo News said, “I made the aircraft with my hard work. My plane can fly till 1,000 feet. Give me one chance so that I can prove that I am a patriotic Pakistani. I informed every department but no one responded to me until this time”.

LAHORE – A man has been arrested for flying his manufactured aeroplane without official permission in Punjab’s Arif ...

The action has been taken for flying the plane without the due approval of the civil aviation, the police further said.

Meanwhile, a CAA expert, Naseem Ahmed while speaking to Geo News said that the CAA laws are very much clear that Pakistani airspace cannot be used without due permission by any air machine.

“There needs to be approved. It’s for their own good for their safety. What if God forbid the plane crashes with any building. Ignorance cannot be used as an excuse,” he said.

KARACHI -  Pakistani star and activist Fakhr-e-Alam has arrived Pakistan on Tuesday as part of "Mission ...