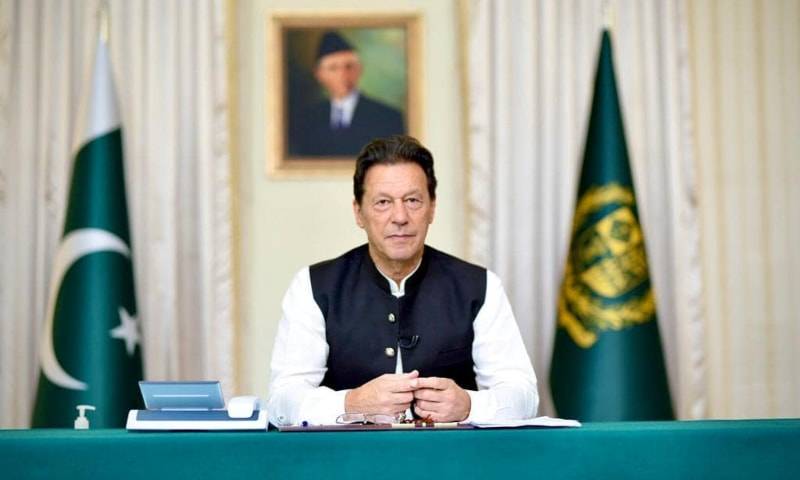 ISLAMABAD – Prime Minister Imran Khan on Saturday urged Pakistani youth to take to the streets in wake of ‘foreign conspiracy’ aimed at removing him from power.

Khan took live calls from the public a day before the no-confidence vote in the National Assembly that will decide his fate.

Before taking telephone calls in in Aap ka wazir-e-azam aap ke saath programme, the premier told listeners that the South Asian country is at a crucial stage and its future is at stake.

He dubbed the success of no-trust as the biggest crime and requested people to raise voices and stage protests against this conspiracy, saying it’s for their future.

However, the premier urged the masses to conduct peaceful demonstrations and avoid violence. "Don’t cause any harm to the country," he mentioned.

Reiterating his narrative, Khan said it's time to decide whether we pick ‘good or evil’ and people who side with honesty and justice take a new life. When a society decides to remain neutral, it begins supporting the bad, he added as he referred staying neutral to ‘supporting evil’.

Responding to a query, the PM said he never remained anti-US, and anti-India or any other state because he wants good relations with all nations.

He also mentioned defeating PDM led alliance in the Assembly tomorrow, adding that surrendering against these people is no option for him in any case.

Firing selvo at next PM contender Shehbaz Sharif, he said they [opposition leaders] are 'slaves who worship money'. Shehbaz is facing charges while opposition leaders have joined hands against him to protect their ill-gotten wealth.

He also mentioned that cases will be registered against those who are committing treason by becoming part of the foreign conspiracy. Khan said government is consulting with legal advisors on this matter and will make a final decision by tonight.

'Army decided to stay neutral and we respect it'

During his speech, the premier said he has no issue with Pakistan Army and has respect for its decision for remaining neutral as he urged the masses not to express their anger toward the state institutions.

Our military leadership decided to stay apart from becoming part of political affairs, Khan said while reaffirming that the current government has good relationship with the powerful Army.

He also mentioned that he personally doesn’t have any differences with the military establishment, saying we respect their choice and stand by them if they decided to not get involved in political matters.

Giving the rationale for his statement, he said institutions believed that it should not become controversial by getting involved in politics.

He mentioned that propaganda is being spread to create rifts between the public and institutions while he reiterated that military has rendered countless sacrifices for Pakistan.

The public interaction session was aired live on television, radio, and digital media.  The live call session comes at a time when the PM is facing a no-confidence motion from PDM led alliance.

The resolution was tabled in the National Assembly last month and voting on it is expected to take place tomorrow.