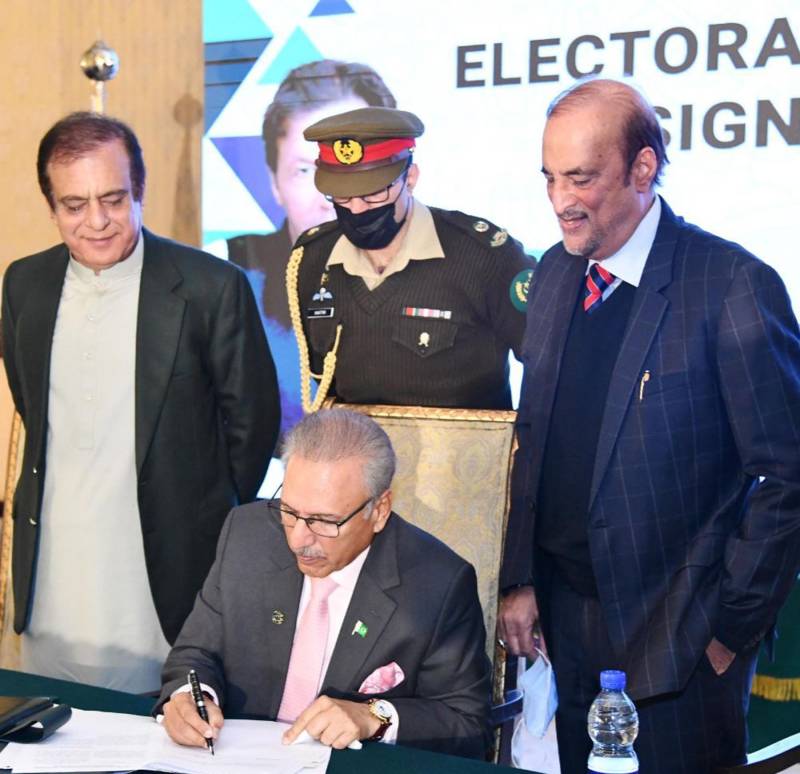 ISLAMABAD – President Arif Alvi Thursday signed into law the Elections Reforms Bill 2021 that provides allows the use of Electronic Voting Machines (EVMs) in the elections and grants the right of vote to overseas Pakistanis.

Addressing the ceremony, the President said that the opposing voices should not be afraid of a “simple” electronic voting machine (EVM) and hoped that would help in holding fair election, bringing an end to the rigging.

“People will have to trust it. It involves no advancement. It is too simple. The country achieves progress by adopting new things,” he said.

Passed by the parliament, the bill provides for holding of the next general election through the EVM as well as granting the right of vote to the overseas Pakistanis through I-voting.

He said the EVM would ensure holding a fair election which had long been desired in Pakistan as every election followed the controversies and rigging charges which also impacted the credibility of the respective governments.

He said that after its success in upcoming elections, the EVM would be marketed as the “Product of Pakistan.” Calling it a “great step”, the president said the legislation was made possible owing to the consistency of Prime Minister Imran Khan and hard work by the cabinet members despite huge resistance.

“The process is the same. Then what is the resistance for?” he questioned. He explained that for an accurate result, the votes would be counted through an in-built calculator, though manual counting would also be available for the skeptics.

He clarified that the Ministry of Science and Technology was not a manufacturer of the EVMs rather it just made a prototype for the experiment. It would be the Election Commission to select the EVM based on the required specifications. Coming to the I-voting for the overseas Pakistanis, the president recounted his as well as PTI’s legal and political struggle to give the voting right to the expatriate. Rubbishing the notion of hacking, the president quoted the 2018 data of digital transactions worth $5 trillion a day which he said involved far lesser chances of hacking than a plane crash.

Terming the innovations as key to development, President Alvi said following the world’s footsteps was no service to the country. He said due to multiple complications, the physical voting for the expatriates was not possible. The president said the countries which had rejected the EVMs, was because they had their own better systems in place.

Contrarily, Pakistan needed it owing to its system’s weakness. He said the EVM would help to alleviate the confusion caused by the post-election rigging charges and bring about a strong government to support the democracy.Don’t worry, the nation will be convinced. Just like this one, the country will make progress in other fields too,” the president remarked. Earlier, Minister for Science and Technology Senator Shibli Faraz said the legislation was a historic achievement as in the past, the controversies on the fairness of elections begot political and economic instability besides confrontation in the parliament. He said following the 90-day deadline by the prime minister, the ministry got the prototype of EVM manufactured through NUST and experimented with it at multiple forums like universities, chambers, and before media. He said it was now up to the ECP to choose the EVM based on the requirements, though the Commission had already formed three committees on the subject that would follow the floating of international tender.

He said the legislation on EVM was a bold decision and no resistance could deter the prime minister’s confidence as the PTI had resolved to establish a system for holding the polls by utilizing the technology. Earlier, Advisor to PM on Parliamentary Affairs Dr Babar Awan said the previous government’s claims of holding free and fair elections were confined to the slogans.

He said the government was also trying to incorporate the use of EVM in the laws of local government elections in Islamabad as well as Punjab.

He said the EVM was meant to minimize the human involvement in elections that would also do away with the possibility of double stamping and rejection of votes.

Asking the opposition not to be afraid of the EVM, he said the resistance against the EVM on the pretext of technology, was irrational as over 186 million people were already using mobile phones in Pakistan besides as well as using social media.

ISLAMABAD – The Election Commission of Pakistan (ECP) has sought funds from the government to produce electronic ...