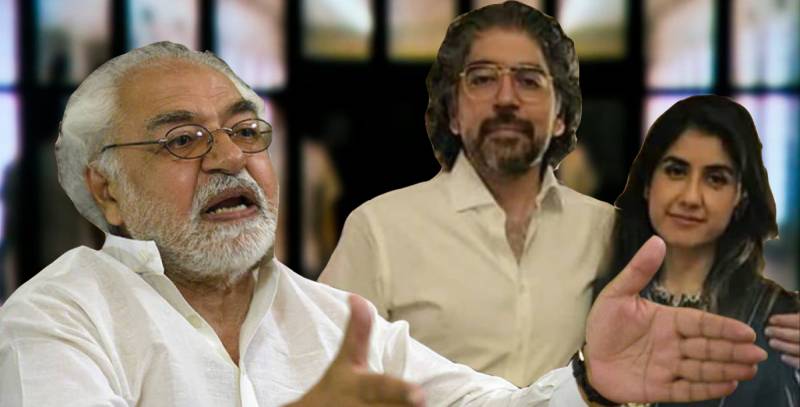 ISLAMABAD – Law enforcers in the country’s federal capital on Saturday arrested senior journalist Ayaz Amir in the murder case of his daughter-in-law Sarah Inam, a Canadian national who was brutally murdered by her husband Shahnawaz Amir.

The capital force made the arrest following interrogation with Ayaz’s son, the prime suspect in the ghastly murder case.

Cops earlier got arrest warrants for Ayaz Amir and his former wife in the case pertaining to the murder of their daughter-in-law.

A case was also registered at Shahzad Town police station under Section 302, while Section 109 (punishment for abetment) was added at the request of Sara's relatives who blamed senior journalist for the murder.

Meanwhile, the culprit, Shahnawaz Amir, was handed over to the capital force on a two-day physical remand a day after being detained.

The defendant’s lawyer however called the case a blind murder, saying the murder was only to the extent of the charge.

In a viral video, Ayaz Amir said “What I just can say is that one should not have to go through such incident, adding that it is a heart-wrenching incident.

It was reported that the suspect lied to his wife about his two other marriages and used to demand money from her, while some reports claimed that Shahnawaz also takes drugs. He also fraudulently registered in his name a new vehicle Sara recently bought.

As the slain told Shahnawaz to return the money and vehicle, the two escalated into a fight, Shahnawaz then hit Sarah on the head with a dumbbell and his wife succumbed to the severe injury.

ISLAMABAD – Pakistani celebrities and social media activists took to Twitter to call for #JusticeForSarah and ...

Some reports suggest that Sarah also hides her marriage to Shahnawaz from her parents. She visited Pakistan three months back and got married to the suspect in Chakwal.