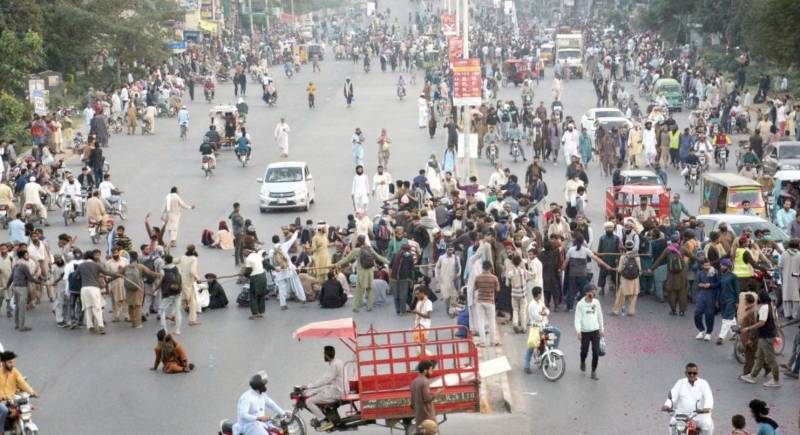 LAHORE – The workers of the banned outfit continued their sit-in in Wazirabad even after signing a peace agreement with the government.

Reports in local media quoting sources said life started returning to normalcy on GT Road, one of Asia's oldest and longest major roads, near Wazirabad and in adjourning areas, as the Tehreek-e-Labbaik Pakistan’s removed the blockade and moved to a nearby park.

The party workers after nearly two weeks of protests opened the crucial highway but said it would not call off its protest until the release of detained leader Saad Hussain Rizvi – who was arrested for inciting violence since April.

Results will be seen from tonight.
InshaALLAH https://t.co/6ACunhCZiC

Sources said the agitators will hold a peaceful sit-in at the nearby park until a concrete development on the implementation of their agreement, particularly the release of Rizvi.

The right-wing banned party and government reached an agreement after a delegation of Islamic scholars including Mufti Muneebur Rehman participated.

Meanwhile, reports claimed that a list of detained activists and workers named in the Fourth Schedule was shared in the steering committee’s meeting, adding that the list has more than 2,000 names whereas the process for their release has been started.

ISLAMABAD – The talks between the government and the banned Tehreek-e-Labbaik Pakistan have reached a positive ...

The masked details of the agreement – which were not shared with the public by either side – also raised a number of questions in the whole development.

Earlier, the proscribed group’s workers called off their long march to country’s federal capital after the leadership inked an agreement. The government has also formed a steering committee led by State Minister for Parliamentary Affairs Ali Mohammad Khan to make a strategy for the release of the TLP chief and the removal of the ban on religious turned political party.

Protesters didn't demand the expulsion of the French envoy and the closure of embassy: Mufti Muneeb

In a similar development, Mufti Muneebur Rehman on Monday trashed the news about the TLP demand which asked for the expulsion of the French envoy and the closure of the embassy.

Speaking from a presser, the noted scholar said falsehoods were spread on media that TLP demanded the expulsion of the French ambassador, the closure of the embassy, and to break ties with the European Union.

Mufti termed it ‘a blatant lie’, raising questions at ministers. How can we trust government officials when they uttered lies publicly?, he questioned.

ISLAMABAD -- A large number of supporters of the Tehreek-e-Labbaik Pakistan (TLP) remained camped in Wazirabad on ...

Earlier, Mufti who revealed the development in a presser with ministers refused to share contents of the accord, he said the details would be made public at an ‘appropriate time’.