Violence in Myanmar pushes thousands of Rohingya Muslims into Bangladesh 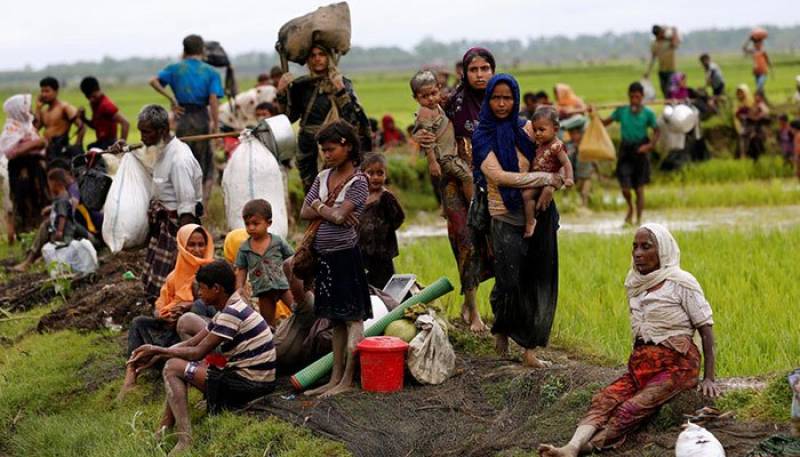 COX‘S BAZAR, BANGLADESH - As inhumane violence at its peak in Myanmar, thousands of Rohingya are fleeing towards Bangladesh seeking safety, international media reported.

Over 2600 houses of Rohingya-majority areas of Myanmar's restive northwest have been set on fire during the last week, while hundreds of people have lost their lives in the recent ethnic violence.

Meanwhile, Myanmar authorities are accusing the Arakan Rohingya Salvation Army (ARSA) of the torching of houses in Rakhine State.

"A total of 2,625 houses from Kotankauk, Myinlut and Kyikanpyin villages and two wards in Maungtaw were burned down by the ARSA extremist terrorists," the state-run Global New Light of Myanmar said.

However, the civilians were blaming the state army for following scorched-earth policy against the Muslims.

Violence against around 1.1 million Rohingya is the biggest challenge for leader Aung San Suu Kyi, who is also being accused by Western critics of not raising voice for Muslim minority.

On August 25, more than 70 people, including security troops and Muslims were killed after Rohingya insurgents, a rebel group, carried out attacks in Rakhine State in western Myanmar.

As per reports, around 150 insurgents stormed over 20 posts early morning with hand-made bombs, the authorities said, adding 12 security personnel are among the dead. According to AlJazeera news, at least 77 Rohingya Muslims were killed in the clashes.

Tension is prevailing in Rakhine, which is home to more than a million Rohingay Muslims, owing to clashes between Muslim and Buddhist communities for years. Tens of thousands of Muslims have fled to Bangladesh due to ethnic persecution.

It is notable that the attacks followed by a report in which it has been warned that people would turn more radicalised if ethnic rift was settled.

A government statement said that "extremist Bengali insurgents attacked a police station in Maungdaw region in northern Rakhine state with a handmade bomb explosive and held co-ordinated attacks on several police posts at 01:00".

The government statement uses the term "Bengali" to describe the stateless Rohingya, because it maintains they are illegal immigrants from Bangladesh.

On Wednesday, a commission headed by former UN chief Kofi Annan urged the Myanmar government to give citizenship to Rohingya Muslims, a persecuted Muslim minority.