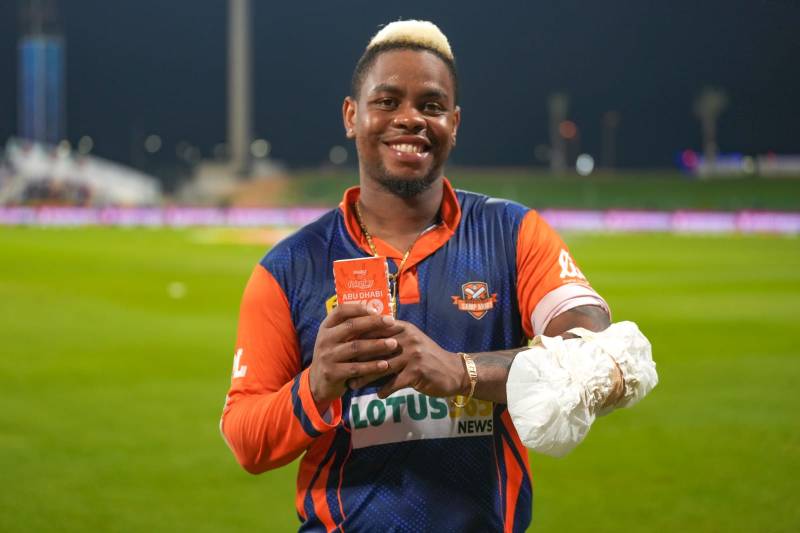 Shimron Hetmyer’s big hits and Karim Janat’s allround show helped Morrisville Samp Army capture Northern Warriors in the 27th match on the tenth day of the Abu Dhabi T10 at the Abu Dhabi Zayed Cricket Stadium on Friday. Samp Army after restricting Northern Warriors to 117 for 7 won the match by five wickets with nine balls to spare. This win also helped Samp Army finish on top of the points table.

Janat after bagging two wickets for 21 runs, went on to crack a breezy 25 off 12 balls with three sixes. Hetymyer speeded up the victory through a quick 45 off 18 balls with five sixes and two boundaries.

Northern Warriors won the toss and elected to bat. They got off to a disastrous start. Sheldon Cottrell struck with the second ball of the first over to remove opener Adam Lyth for a duck, caught by Hetmyer at third man off a thick edge. Usman Khan tried to wipe away the effect of the early loss by hitting Cottrell for two consecutive boundaries off the fifth and sixth deliveries.

But Maheesh Theekshana dealt a heavy blow by clean bowling Usman Khan with the second ball of the second over for 8. Two balls later, skipper Rovam Powell got run out to a duck to a direct hit by Karim Janat while attempting a quick single.  Sherfane Rutherford tried to reduce the gloom in the Northern Warriors dug out by hitting Dwaine Pretorius for a six over deep square leg. Off the fifth ball Pretorius got Kennar Lewis caught by Karim Janat for 5. By the end of the third over. Northern Warriors were tottering at 23 for 4.

Theekshana gave only a boundary to Rutherford in the fourth over. Chamika Karunaratne got hit for a boundary, both by Adam Hose and Rutherford.  At the half way mark, Northern Warriors were 46 for 4, needing some quick runs for a big score. Hose scooped Karim Janat for a six off the first ball. Rutherford hit the third and fourth deliveries of that over for boundaries. Eighteen runs came off that over.

Hose continued to score when Cottrell was re-introduced for the seventh over hitting a boundary past mid-off. He also picked another boundary by hitting over Cottrell’s head. A third boundary was picked off Cottrell to deep square-leg region.

Neither Hose nor Rutherford could get boundaries off the seventh over bowled by Pretorius. He then had Rutherford out with the fifth ball, caught by Ahmed Raza, for 30. Abhimanyu Mithun came in and hit the last ball from Pretorius for a six over mid-wicket.

Hose then hit Ahmed Raza who bowled the ninth over for four consecutive sixes. The first was hit over midwicket, while the second, third and fourth went over long-on. Hose reached his half century and also carried Northern Warriors to 114 for 5 by the end of the ninth over. Twenty-eight runs came off that over.

In the last over, Karim Janat yorked Mithun with the third ball for 7. Isuru Udana took a bye and gave Hose the strike. Janat clean bowled Hose with the fifth delivery to end his superb knock of 54 off 25 balls with four boundaries and five sixes. Northern Warriors thus posted 117 for 7 in 10 overs.

Samp Army, who had already qualified for the play-off, lost their opener Johnson Charles to the first ball from Mohammad Irfan, caught by Lyth at extra cover. Opener Karim Janat hit Irfan’s fourth and fifth deliveries for sixes. Shimrn Hetmyer picked a boundary off Gus Atkinson’s fourth deliver of the second over through a well-placed drive through the covers. He also cut the last delivery for another boundary.

Karim Janat hit his third six by pulling Mithun’s first delivery of the third over. Hetmyer hit the last ball of that over for a six. It was a spectacular six as he sliced the delivery over the exta cover. Hetmyer then hit Junaid Siddique’s second delivery off the fourth over for a straight six and also the last ball of that over for another six. The second six almost had him caught at long-on but Udana lost his balance at the boundary line.

Hetmyer’s continued his six-hitting spree in the fifth over by hitting Udana to deep mid-wicket. However, Udana struck with the fifth ball to clean bowl Janat for 25.  Pretorius walked in and hit the first ball he faced from Udana for a boundary. At the half way mark, Samp Army were strongly placed at 75 for 2 needing only 43 more runs in the remaining five overs.

Hetmyer hit his fifth six to deep wicket off Mohammad Irfan but fell to the next ball, caught by Usman Khan for 45. Irfan struck with the next ball by trapping David Miller leg before.

Skipper Moeen Ali fell to Atkinson’s first ball of the seventh over for a duck caught by Powell at long-off. These quick wickets helped Northern Warriors get back into the game. Karunaratne hit Atkinson’s fifth delivery for a six to make it 28 runs needed from 18 balls.

Pretorius hit Mithun for a six off the fourth ball to reduce the margin to 15 runs from 12 balls. In the ninth over, Karunaratne hit Udana for a boundary, six and another boundary to win by five wickets with nine balls to spare.

Player of the Match: Shimron Hetmyer