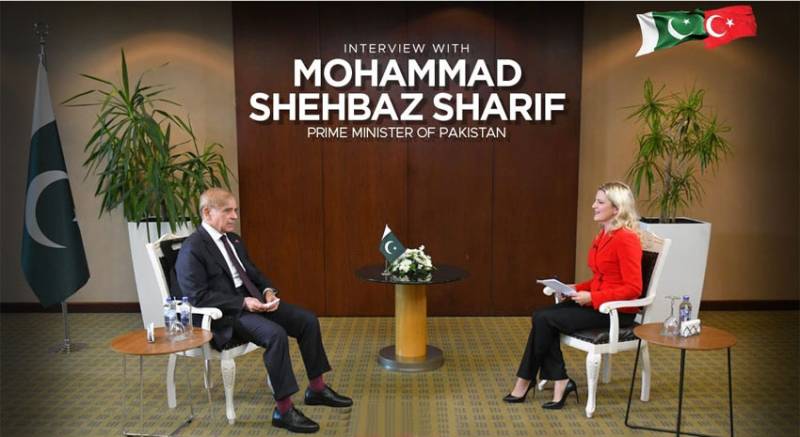 ANKARA – Prime Minister Shehbaz Sharif has called for turning Pak-Turk fraternal ties into bilateral strategic economic partnership that will be beneficial for people in both countries.

The premier expressed his view while talking to Turkish media outlet TRT World in which he also called an agreement to take the bilateral trade to $5 billion “great initiative”.

He highlighted that Turkey can held energy-deficient Pakistan meet its energy demand from renewable resources as it has vast experience in hydel power projects.

PM Shehbaz revealed that he had urged President Recep Tayyip Erdogan to make Turkey a part of the multibillion dollar CPEC project as the move will benefit the whole region.

While talking about massive surge in petroleum prices to revive the $6 billion IMF programme, he said that increasing prices was necessary to save Pakistan from facing bankruptcy.

He said that the government was offering subsidy on various items to facilitate the people living below the poverty, adding that all measures will be taken to look after the marginalized segment of the society.

Responding to a question about general elections in the country, the premier clearly stated that polls will be held after 15 months.

To a question regarding recognition of Israel, the prime minister said that Pakistan stands for the rights of subjugated segments of the world. He categorically said harsh measures by Israeli forces against Palestinians are unacceptable to any peace loving society. Therefore, until and unless the issue of Palestine and Kashmir is resolved according to the aspiration of people of these areas, peace cannot be restored in these regions, Radio Pakistan reported.