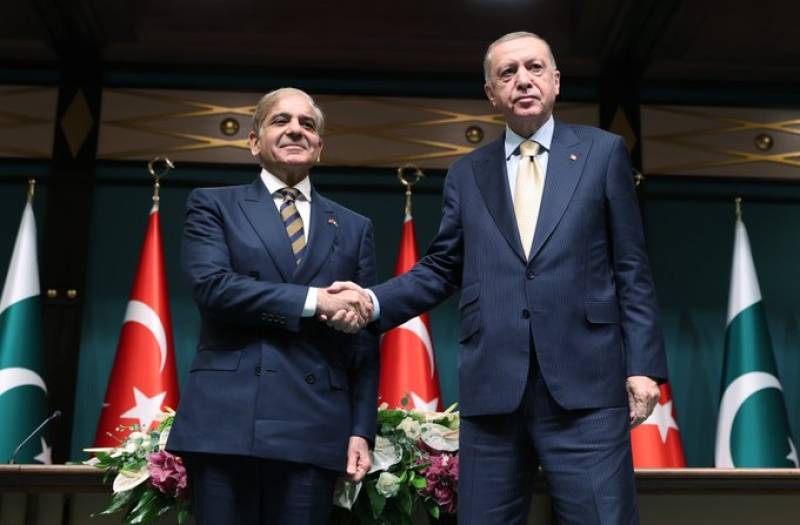 ISLAMABAD – Prime Minister Muhammad Shehbaz Sharif and President of Turkey Recep Tayyip Erdogan have vowed to take the bilateral ties between the two countries to new heights by strengthening cooperation in diverse fields.

Both leaders expressed their views during a joint press conference after a one-on-one meeting.

The prime minister highlighted that this year, the two brotherly countries are celebrating the 75th anniversary of their bilateral ties that continued from generations to generations.

The prime minister, while terming his meeting with President Erdogan very productive, expressed the hope that under the dynamic leadership of president, the bilateral ties would scale to new heights.

He welcomed announcement from Turkish President to hold next session of high level meeting in Islamabad in the month of September, Radio Pakistan reported.

PM Shehbaz revealed that a strong business delegation will also visit Pakistan. He expressed hope that people from Turkey will invest in sectors like e-commerce, tourism, education, infrastructure and hydro power generation.

He said launch of PNS BADR, MILGEM corvette is an example of our wonderful collaboration in defense industry.

He also appreciated Turkey for its steadfast support on Jammu and Kashmir dispute. He said Indian actions are posing threat to regional peace and stability.

Turkish President Recep Tayyip Erdogan in his remarks said that Turkey is ready to further enhance its bilateral relations with Pakistan. He said that both countries already have strong cooperation in defense sector.

The Turkish President a strategic economic framework agreement was signed between the two countries to enhance trade. He said trade volume between Turkey and Pakistan has exceeded the figure of one billion dollars which is highest since 2010.

He said Pakistan and Turkey are working to further improve their relations in the fields of tourism, education, logistics, civil aviation and communication sectors.