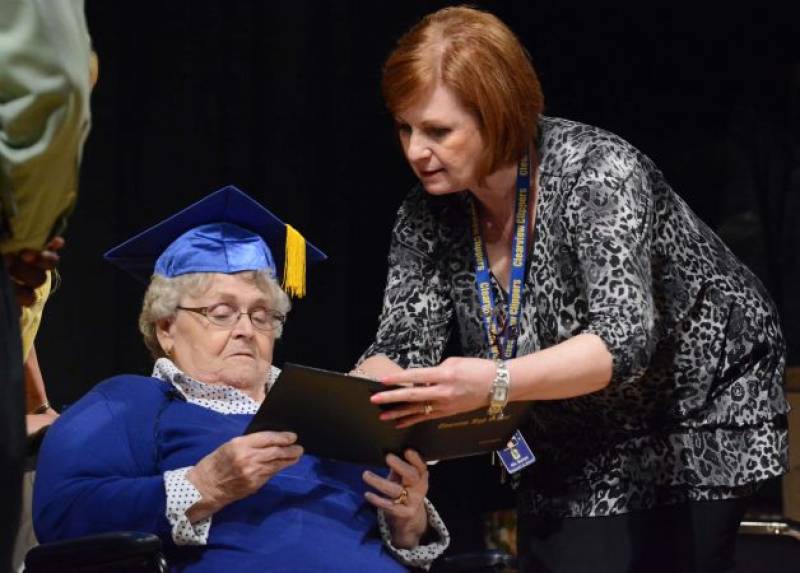 OHIO (Web Desk) - An 80-year-old woman who missed her high school graduation in 1952 because she needed a half-credit for gym class has received her diploma more than six decades later in a surprise ceremony.

Susan Bostik Reynolds fell short of her graduation requirements at Clearview High School in Lorain, Ohio, after she became ill and was unable to participate in a rope activity in physical education.

She left school without donning the traditional gown and cap, and went on to marry, have five children and work at Lorain National Bank. She believed she would never receive her high school diploma.

But on Thursday, Mrs Reynolds received the certificate a staggering 63 years on after her family secretly contacted school officials and arranged for her to be handed the coveted document. 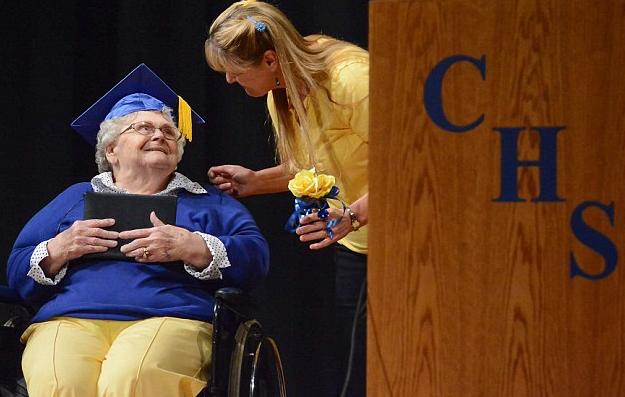 The pensioner was initially told she was visiting the school at 4700 Broadway as an early Mother's Day gift - and was made to wear blue and yellow clothes, according to The Morning Journal.

But after she arrived at the building, her family hugged her and told her the truth. 'Mom, the reason we are here, they agreed to give you your diploma,' one of her daughters, Cindy Bracy, said. 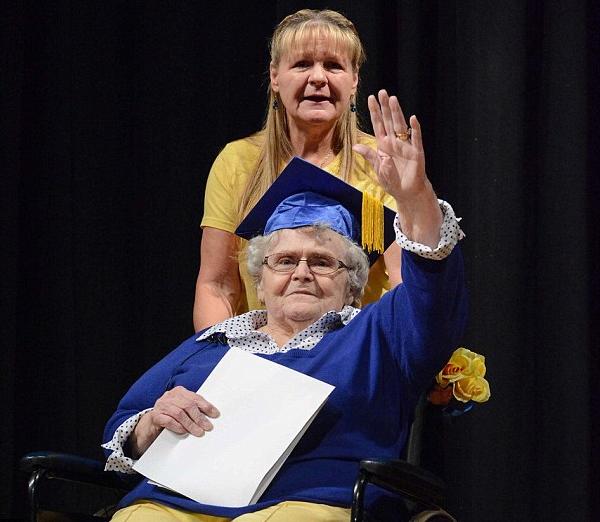 Mrs Reynolds, who uses a wheelchair to get around, reportedly closed her eyes and replied: 'Oh'. As she opened them, Ms Bracy placed a blue graduation cap with a blue and yellow tassel on her head.

The pensioner was then wheeled into the school's auditorium, where she was met with a recording of 'Pomp and Circumstance' and dozens of students, who had been given open invitations to the event.

'We have a very special presentation,' Clearview guidance counselor, Jean Branzel, told attendees. 'It shows everyone, no matter how long it takes, it’s important to get your diploma.'

Mrs Reynolds was then presented with her diploma by Clearview Superintendent Jerome Davis. She was pictured smiling widely as she received the document, before waving at students.

Speaking after the service, she tearfully told the Journal: 'I can't tell you [how I feel] now, because I waited a long time.' But she added: 'I’m happy. And I'm glad that my children were here to see it.'

Mrs Reynolds, who can speak two languages, explained how her illness in 1952 had left her a half-credit short for gym class 'I was sick. I had to go to the hospital. I had an appendix attack,' she said.

'I didn’t finish gym class. I wouldn’t go up on that rope. Well, they were only doing their job, I guess.'

On Friday, Ms Bracy told Fox News: 'I didn’t want the school to be bashed in any way because they didn’t give it to her, I just wanted it to be fixed and these people were wonderful enough to fix it.'

Mrs Reynolds lives at Avon Oaks nursing home with her husband, Art Reynolds. Her diploma presentation means the total number of students in her 1952 graduating class now stands at 64.