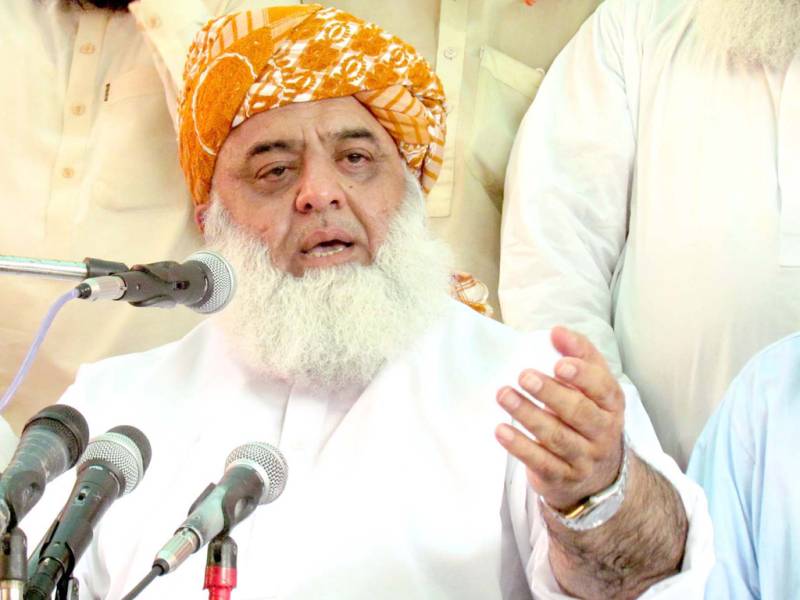 Addressing a press conference, the politician said the incumbent government is the result of a fake election and fake results.

The former lawmaker said all the opposition parties had rejected the July 25, 2018 elections and had called for fresh elections.

"In this regard, the Jamiat Ulema-i-Islam and Muttahida Majlis-e-Amal have carried out 15 'million marches' in the country to raise awareness among the people," he shared.

Fazl, who agreed to think over delaying his 'Azadi march' yesterday, said as a result of this 'illegal government and its incompetencies', the country's economy has sunk.

The Muslims of Pakistan are in anguish over the state of religion in the country, he lamented.

Fazl said a meeting between JUI-F members was held today (Thursday) in which it was decided that on October 27, the party will express complete solidarity with them and with those demonstrations of solidarity, a march on Islamabad will be kicked off.

"Groups of people from all over the country will embark on this journey which will culminate in Islamabad, where we will send the government packing," he asserted.

Fazl revealed that they would gather at D-Chowk, adding that they were 'not the ones to disperse' easily.

The JUI-F chief rejected the impression about him making a solo flight and said that the party is in touch with all the other parties and making decisions in consultation with them.

The JUI-F supremo said he met PPP Chairman, Bilawal Bhutto and some very positive developments took place during the interaction.

A day earlier, Pakistan Muslim League-Nawaz leaders met Maulana Fazl-ur-Rehman in Islamabad after which the JUI-F supremo agreed to brainstorm on delaying the march, despite earlier affirmation that the march would not be delayed.

Interestingly, in 2014, Pakistan Tehreek-e-Insaf had staged 'Azadi March' against then ruling Pakistan Muslim League Nawaz and had gathered at the D-chowk.