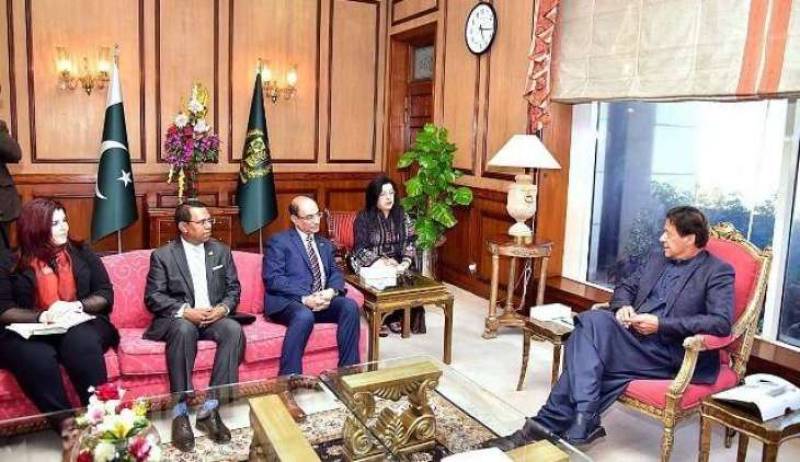 ISLAMABAD – Prime Minister Imran Khan on Tuesday lauded Organization of Islamic Cooperation (OIC) for extending unwavering support to the people of Indian Occupied Jammu and Kashmir, particularly in the aftermath of India's unilateral and illegal actions of 5 August 2019.

The prime minister was talking to OIC Secretary General's Special Envoy for Jammu and Kashmir, Ambassador Yousef M. Al Dobeay, who along with a high-level delegation called on him.

Welcoming the timely visit of the OIC delegation to Pakistan and AJK, the prime minister said that since 5 August 2019, 8 million Kashmiris continued to suffer under the lockdown and communications blackout, turning the entire IOJ&K as the world's largest open prison.

The prime minister emphasized that the people of Pakistan as well as Kashmiris looked towards the OIC and Muslim Ummah for active support in the resolution of the Jammu and Kashmir dispute in accordance with the relevant UNSC resolutions.

The prime minister also apprised of the grave implications of extremist "Hindutva" ideology of the RSS-BJP dispensation, manifest in discriminatory policies against minorities in India especially Muslims.

Drawing a parallel between the recent anti-Muslim Delhi riots and the 2002 Gujarat pogrom, the prime minister warned that under the rising wave of "Hindutva" the situation could worsen even further.

He underlined the need for the international community to take cognizance of the situation and work to effectively address it.

Ambassador Al Dobeay thanked the Prime Minister for his participation and leadership in the Makkah Summit last year.

Highlighting his commitment to the Kashmir cause as the Special Envoy, he emphasized that Kashmir and Palestine remained the top-most items on the OIC agenda, duly addressed by a series of strong resolutions from Council of Foreign Ministers' (CFM) meetings and Summits.

He reiterated OIC's principled position on the internationally recognized Jammu and Kashmir dispute, which called for its peaceful settlement in accordance with the relevant UNSC resolutions and the wishes of the Kashmiri people.

The Special Envoy highlighted the statements issued by the OIC condemning India's actions of 5 August 2019. He added that his visit to Pakistan and AJK was an effort to make a first-hand assessment of the situation with a view to presenting a report to the forthcoming CFM meeting.

Views were also exchanged on the next steps from the OIC platform to help advance the Kashmir cause.