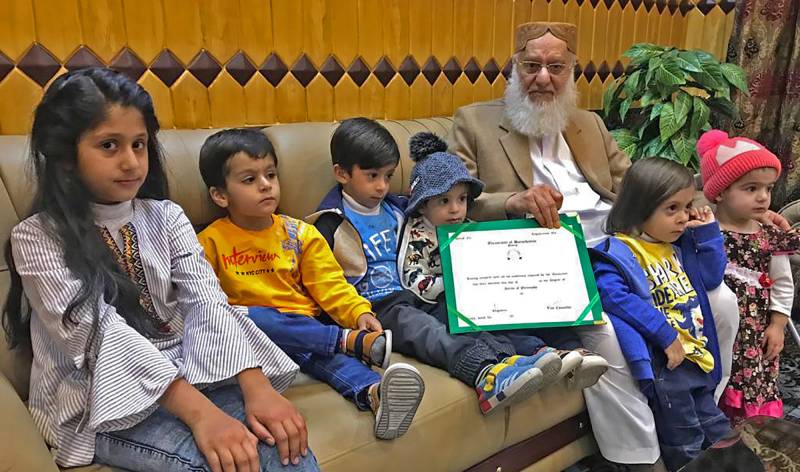 QUETTA -- Age does not matter, but passion does. And Haibat Khan Haleemi has proved this, as he is making headlines in Pakistan and abroad for completing his PhD at 80.

Haleemi, who retired from the police force a long time ago, hails from the Mastung district in southwestern Balochistan. He received his PhD in political science at the University of Balochistan convocation last month.

This is no small feat in a country like Pakistan where life expectancy at birth is about 66.34 years on average for men and the official age of retirement is 65.

Haleemi served in Balochistan's police force for 40 years but was always driven by his passion for knowledge. On October 26, he received his doctorate degree for a thesis on Balochistan’s geography and security challenges. “I was appointed as a constable in Balochistan Police but decided to focus on my educational career after ten years in service,” Haleemi said. “What began several decades ago culminated in this doctorate degree in 2021.”

“I guess I am the first student in Balochistan’s history who got a standing ovation at the auditorium,” he said. “People stood up and clapped ... It was a proud moment which made me feel that I was rewarded for years of my educational struggle.”

“We did not have any tutor until secondary school since our father used to teach us,” says Haleemi’s 43-year-old son, Ali Haleemi. “He managed to take out time even during his regular police service and always remained our inspiration.”

“When he retired from the service in 2005, we requested him to rest and spend time with the family,” Ali added. “But he was determined to continue his education and we supported his decision.”

Haleemi also served as chief law instructor at the Police College of Quetta in the 1980s where he started teaching criminology. During his stint at the institute, he appeared in the competitive exams for the post of divisional superintendent police and passed.

“Several police officers asked me to turn my criminology lectures into a book,” the retired officer told Arab News during an interview last week. “The vice chancellor at the University of Balochistan asked me to start lecturing on the subject in 2005, saying the province did not have a criminology department and students were forced to travel to Karachi or Islamabad to study the subject. I decided to do MPhil before teaching students and then took the next step to do my PhD.”

Professor Dr. Kaleemullah, head of the university's history department who supervised Haleemi’s thesis, said the octogenarian student would serve as an inspiration to the younger generation of Pakistan. “He worked very hard on the thesis and submitted a well-researched document based on his vast information and knowledge,” Kaleemullah said.

The province’s newly elected Chief Minister Mir Abdul Qudus Bizenjo calls Haleemi an “asset” for the country. “The government wants to support people like Haibat Khan Haleemi who have been promoting education,” he said. “We have been trying to utilize all resources to uplift education in the province and will add his research as part of our policy for the future.”

Haleemi’s seven-year-old granddaughter, who studies in the second grade in Quetta, said she wanted to follow in his footsteps. “I feel very proud of my grandfather who has done his PhD at such an old age and has become a motivation for so many people,” she said.

Haleemi said he studied for six hours a day while enrolled in the PhD programme, which he described as a “tough experience” for someone as old as him.

But "our religion teaches us to seek knowledge from the lap of our mothers until we reach our graves,” said the retired officer who suffers from age-related stiffness of the neck and said he finally just wants to rest.

PESHAWAR – A man, who was appointed as security guard 20 years ago on matric qualification, has now earned his ...