Calls for removal of PM, interior minister, senior army officer over gun attack on him, and an independent inquiry into attempt on his life 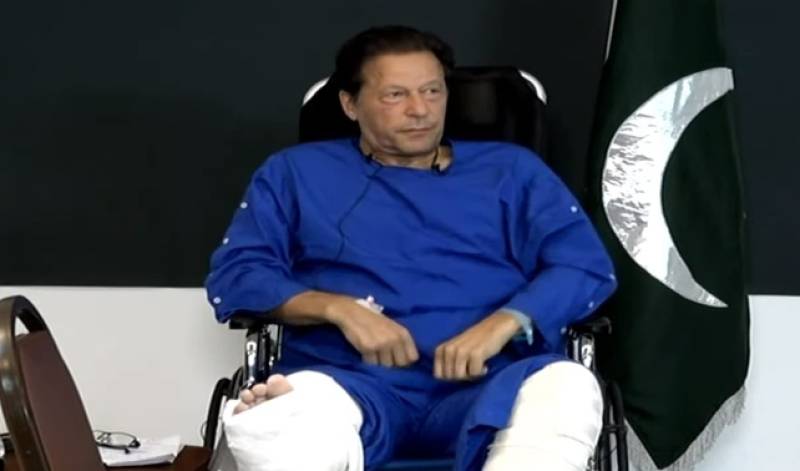 ISLAMABAD – PTI Chairman Imran Khan on Friday called upon his party workers and supporters to continue protests until Prime Minister Shehbaz Sharif, Interior Minister Rana Sanaullah and a senior army officer resign from their offices and they are investigated for the gun attack on him.

In his first televised address from Shaukat Khanum Hospital after being injured in the gun attack on Thursday, the defiant politician vowed to take to the street once again and lead a march on Islamabad once his wounds heal.

Saying that he was aware of the threat of an attack on him, the 70-year-old politician named those allegedly involved in the attack. He alleged that Shehbaz Sharif, Rana Sanaullah and Major General Faisal had prepared a plan to kill him.

The former prime minister received four bullets in his leg in the gun attack during his party’s long march on November 3. At least 10 others, including PTI leaders, were injured and a citizen was killed.

Khan said that he was trying to register an FIR against the prime minister, interior ministry and the army officer, adding that a fair investigation could not be held as long as “these three” are in their offices.

Providing details of how "they" made the plan to assassinate him, the PTI chief said, "They used a similar strategy that was used to kill [Punjab Governor] Salmaan Taseer."

"They tried to accuse me of blasphemy to provoke the public against me," Khan said.

He claimed that two gunmen attacked him from two different sides, adding that one fired a burst from the crowd while the other was somewhere in a nearby building. Khan said one of the attackers escaped as he assumed that he had been killed.

At the beginning of his address, Imran Khan slammed the incumbent government and lamented how his government was ousted through a no-confidence vote.

The PTI chairman accused the Election Commission of Pakistan (ECP) of favouring the incumbent government. He said the ECP chief became a tool of the “imported government” to disqualify him in the Toshakhan reference.

Khan said they wanted to disqualify him in order to provide a “level-playing field” to Nawaz Sharif, who had been involved in corrupt practices. He said that he cannot be compared to the Sharif family, which stashed assets worth billions abroad and lives in expensive apartments in London.

He stated that his party would move the court against the ECP's decision to disqualify him.

PTI supporters and leaders are holding protests in major cities, including Islamabad, Lahore, Peshawar and Karachi, against the gun attack on Imran Khan.

However, Rana Sanaullah has rejected the allegations, stating they see Imran Khan as a political opponent, not as an enemy.

He added that Khan, however, took the political opponents as his enemies. He pointed out that the suspect was in police custody and his statement was recorded in Gujrat.

He raised objections to delay in registration of the FIR against the incident, adding: “Maybe they (PTI) are trying to register the FIR as per their wishes."