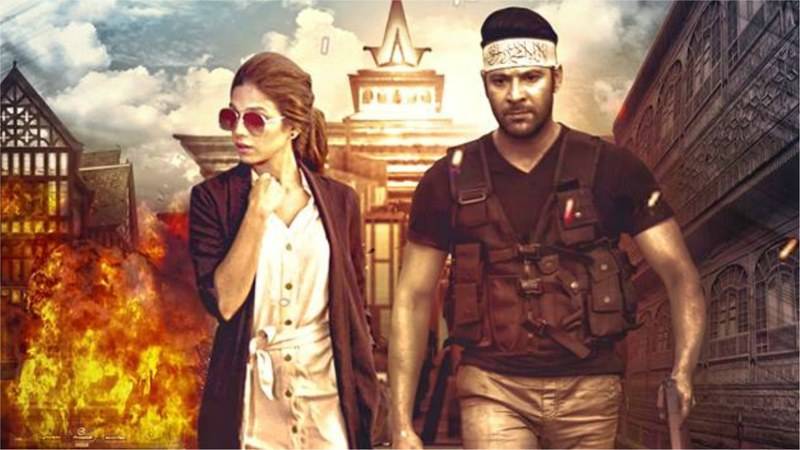 LAHORE - Moammar Rana and Sonya Hussain will be appearing in Azaadi together. Their film is all set to hit theatres on Eid-ul-Fitr. We caught up with both the leads of the upcoming film based on the Kashmir conflict. We asked them questions that you'd love to hear answers of.

DP. Moammar, do you think the film Azaadi is based on the story of Burhan Wani?

MR. It is not about Burhan Bani. Azaad is a freedom fighter that is it,a man on a mission. When u see the movie u will get it.

Q. So do you feel the difference between your previous movies and Azaadi?

MR. When Chooriyan was being shot it was so hot the producers were fighting i used to pray the movie does not go on. This is the most difficult film i have done in 24 years. After Allah, it depends on public now.

Q. What are your views on the revival of Pakistani cinema?

MR. It will take time. The films should have a different technique, should not be seen like a drama. A feature film should be different. In films everything is about the hero but it is not his fault it is the decision of the makers. Plus if people are watching u on tv then why would they go to cinemas, a feature film should not be like a long drama.

Q. Bollywood films have been banned on Eid. Do you think it is a feasible step to promote our own films?

MR. Pakistan first for me, even though i have a lot of friends in Bollywood. Im not afraid of their films but we work very hard and then you run indian films even though they kicked you out. I fail to understand.

Q. They banned Omer Sharif's film as well in India, what is your take on that?

MR. They don't want us. Our people simply want work so they go to them for it.

MR. I used to go to the gym twice a day. I started watching youtube videos on Kashmir to prepare for the role. They were so intense. India lies about it but nothing is normal in Kashmir. I had a Jazba after that to look intense for the role. After that i was Azaad, my family used to tell me you are not Moammar Rana any longer you are Azaad.

Q. What do you think about your current audience?

MR. For cricketer and actors, masses need to be affected. Masses should like you and you should get them out of their homes.

Q. What difference do u feel there is between Azaadi and other films releasing on Eid-ul-Fitr?

MR. It is a different genre. It is patriotic, others are different. After a long time im making a comeback so i am expecting an audience due to that.

Q. Moving a little further from the work front, how have you managed to keep your marriage intact and flowing with no record of any controversies?

MR. She managed me. I told her you will have to deal with various rumours that could be true or not. She said there are no issues. We are bestfriends first and then a couple.

DP. Which character are you playing and what is it about?

SH. I am playing the character of a journalist. She is from London and her journey starts from there. I will not reveal a lot, this is enough.

DP. We are mindblown by the trailer of the film. What is the one reason you should watch the movie in the cinema?

SH. I have done a serious movie before and people did not like it. Why people should go is because Azaadi is a complete package. It is not a rom-com but you will find romance and other emotions as well, not just Kashmir. The audience will not feel like it was a waste of time.

DP. It is a tough role so how did you manage?

SH. For an actor you need to be challenged. I choose characters that i have done never before. I have been Nazo who was a girl dealing with mental health issues. I have done the role of a bubbly girl. In Tanhai i was playing the girl who had her naked pictures leaked. I have played a tom boy as well. Actors are not offered challenging scripts and actors don't accept them either. They think they will get out of the boundaries of heroinism. I think about my future, i don't want regrets that i did not take up different roles while i had the opportunity.

DP. What is the difference between the audience then and now? Do you think they aggravate rumours about stars these days?

SH. We are public property we can't control that. Some say good things while some say bad things. There is a difference in the audience now social media has changed the previous attitude. Our people are frustrated with personal issues. Social media is it. People say whatever.

DP. In what ways did you get affected by this intense character?

SH. I got touched by Nazo the most because i visited rehabs and i thought over some things that are taboo that we do not talk about. I used to cry. Have a look at Syria nobody wants to talk about that either. We are actors, we are Kashmir's voice.

DP. What is your take on the banning of Indian films on Eid-ul-Fitr?

SH. Indian movies should have been banned earlier. Two weeks of banning lessened to one week which is a sad thing though. We have three big films this Eid. Why not give them a chance? Medium should be there, i don't mind Indian films running because competition will be there. But i am happy about the ban on Veere Di Wedding. About what Swara Bhaskar said, how could she, they are creating revenue from here after all.