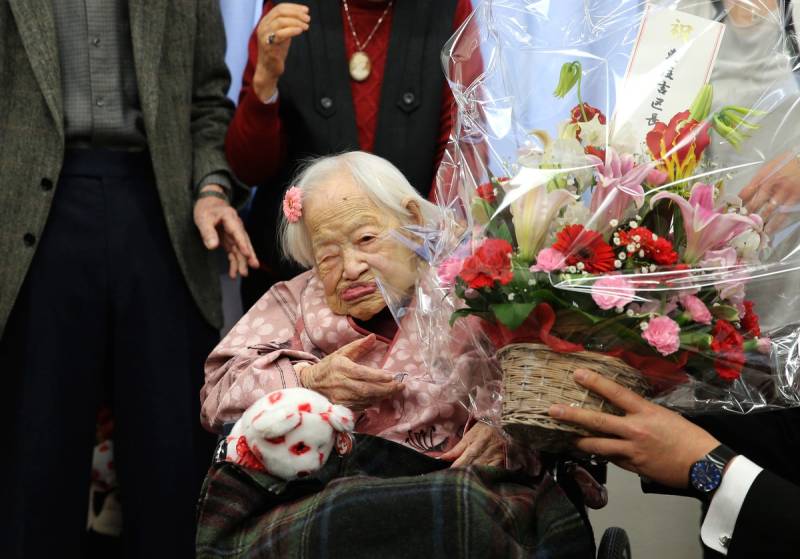 TOKYO (APP) - The world's oldest person Misao Okawa, a mother of three, grandmother of four and great-grandmother of six, turned 117 on Thursday in western Japan.

Okawa, one of only a handful of people born in the 19th century and still alive "is looking in good shape," an official at her Osaka nursing home told AFP.

Okawa, who came into the world five years before the Wright brothers achieved the first powered human flight, celebrated her birthday a day early, surrounded by family.

Guests included her oldest son Hiroshi, 92, and a two-year-old great-grandchild.

Local official Takehiro Ogura also stopped by with a bunch of flowers for Okawa, whose birth coincided with the outbreak of the Spanish-American war as the old empires gave way to new.

"Happy birthday to you," Ogura said into her ear. "Was it (the past 117 years) long?" "It was short," said Okawa, dressed in a pale pink kimono with a cherry blossom pattern.

Asked if she has discovered the secret of living a long life, Okawa wasn't telling the assembled media, answering coyly: "Well, I don't know."

Japan, known for the longevity of its people, is also home to the world's oldest man -- 112-year-old Sakari Momoi.

In 2013, life expectancy for women in Japan was 86.61, the longest in the world, while for men it was 80.21, the fourth longest, according to the health ministry.