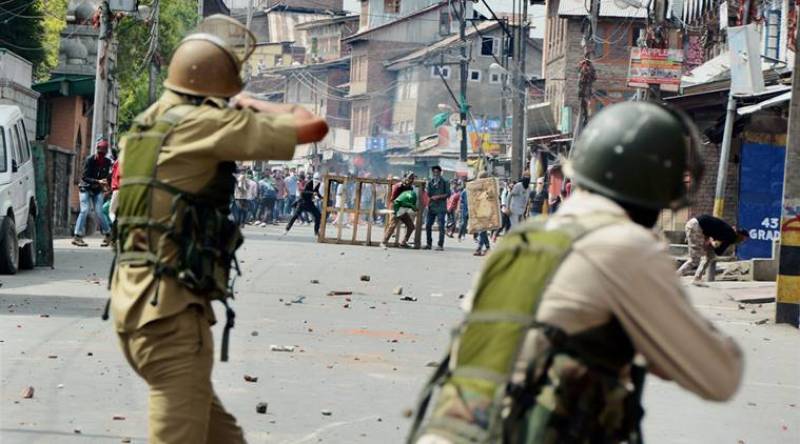 SRINAGAR (Web Desk) – Four people were martyred and hundreds of injured in ongoing Indian state terrorism in several divisions of the held-Valley.

The puppet authorities continued to impose the curfew and other restrictions across the valley on the 29th consecutive day on Saturday to prevent people from holding demonstrations against the killing spree unleashed by Indian forces.

Three people, Muhammad Maqbool Wagay, Zaghoor Ahmed and Sameer Ahmed Wani, were martyred in different areas of Budgam, while and one Danish Rasool lost his life  at Sopore in Baramulla.

The death toll in the ongoing Kashmir Intifada has risen to 68 while thousands of people have been wounded so far in firing, use of pellets guns and tear gas shells by Indian troops and police personnel on the dissenters.

The curfew was imposed in held valley on 9th of last month after the extra-judicial murder of top of Hizbul Mujahideen commander Burhan Wani, by Indian troops.

Meanwhile, the medical fraternity staged the protest in Srinagar against the use of pellet guns on peaceful protesters by Indian forces in the Kashmir Valley.

Doctors while addressing on the occasion termed the economic consumption of pellets inhuman.

The global human rights watchdog, Amnesty International, has also asked India to end the use of pellet guns in occupied Kashmir that has taken lives and left hundreds blind in the ongoing protests.