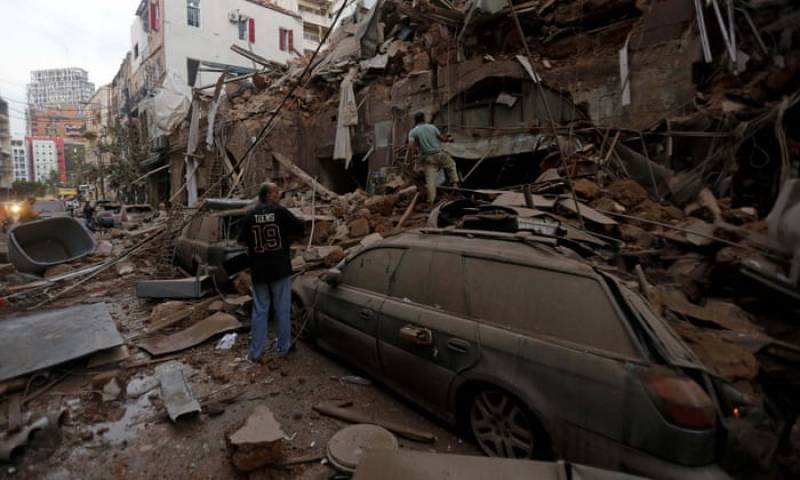 BEIRUT - The death toll from a huge explosion that rocked Beirut on Tuesday has reached 165, the Lebanese Red Cross has said.

More bodies of the victims are being pulled out of wreckage caused by a massive explosion.

The organization told Lebanese TV the Red Cross was coordinating with the health ministry for morgues to take victims because hospitals were overwhelmed.

Major streets in the city were littered with debris and damaged vehicles, and building facades were blown out.

Prime Minister Hassan Diab declared three days of mourning from Thursday as early investigations blamed negligence for the explosion at Beirut port, which has left tens of people missing and injured more than 5,000 others.

Up to a quarter of a million people were left without homes fit to live in, officials said, after shockwaves smashed building facades, sucked furniture out into streets and shattered windows miles inland.

The death toll was expected to rise from the blast, which officials blamed on a huge stockpile of highly explosive material stored for years in unsafe conditions at the port.

“No words can describe the horror that has hit Beirut last night, turning it into a disaster-stricken city,” President Michel Aoun said in an address to the nation during an emergency cabinet session.

Aoun said 2,750 tonnes of ammonium nitrate, used in fertilizers and bombs, was stored for six years at the port after it was seized.

The government was “determined to investigate and expose what happened as soon as possible, to hold them responsible and the negligent accountable,” he said.

For many, the blast was a dreadful reminder of the 1975-1990 civil war that tore the nation apart and destroyed swathes of Beirut, much of which had since been rebuilt.

Beirut Governor Marwan Abboud told Al Hadath TV that collective losses from the blast might reach as high as $15 billion, including indirect losses related to business.