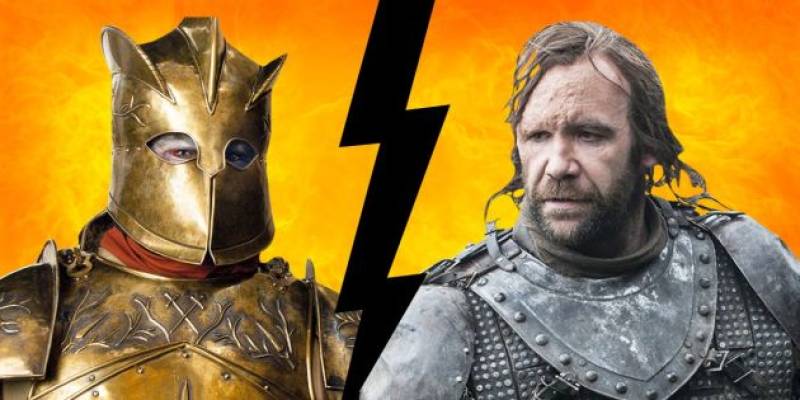 Viewers had hardly digested the return of Uncle Benjen. Yet Game of Thrones' Sunday episode "The Broken Man" brought another man back from the dead, i.e. the burnt-faced man Sandor Clegane alias The Hound.

The episode's opening shows The Hound cutting huge trees in an unknown place along with Ian McShane - who had apparently saved him. McShane also narrated the tale of The Hound's survival, saying that he had found him badly injured, but somehow alive.

"I think gods are not done with you," said McShane, voicing what he felt was the cause of the Hound's survival. However, true to character, the Hound himself put his survival down to "hate".

In the second scene, the \hound is seen sitting with a group of women and children - whose families have apparently been murdered. In the same scene, three armed men warn them that the "the night is full of terror."

Later, in the final scene, The Hound is again seen chopping trees, when he suddenly runs towards the camp and finds that all the women and children he met earlier slaughtered. McShane's body is among them, hanging by a rope.

Did you miss the last Game of Thrones Episode? Here is our quick recap

The Hound's surprising return has given wind to the "Cleganebowl" theory leading fans to clamor for an epic fight brothers, the Hound and the Mountain.

What this theory leaves to out imagination is how exactly the Hound will return to Kings Landing and enter a fight with his brother..

The Hound's epic return was also felt on social media. Fans are now expecting other presumably dead characters to return like him.

The Hound at the end of #GameofThrones pic.twitter.com/5GgAACVhyO

Well if The hound is alive, odds are Stannis Baratheon is alive too. #GameofThrones

Whaaat? The Hound is alive?? ?? #GameofThrones

The Hound as the Punisher of Westeros. Nothing would please me more. #TheBrokenMan #GameofThrones pic.twitter.com/84JW7hmXG1

How in the hell is that hound alive !? #GameofThrones

When you exactly predicted the return of the Hound #GameofThrones #GoTSeason6 #GoT pic.twitter.com/7ZWmLQdBbF

Other Key Developments from "The Broken Man":