US silence on satellite explosion no cause for alarm: space agencies 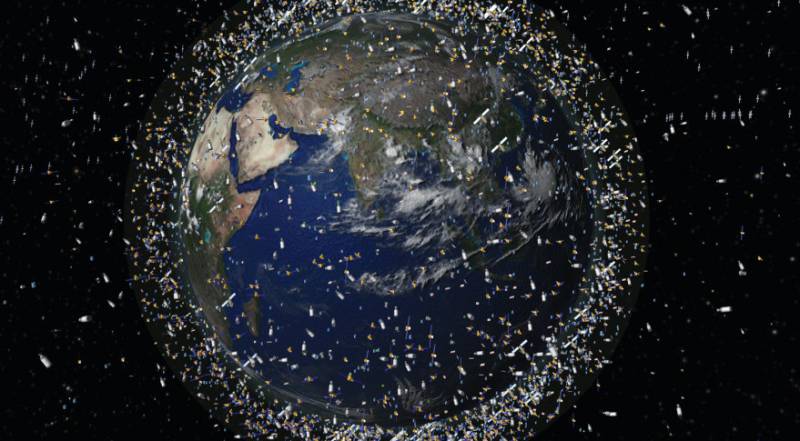 PARIS (Web Desk) - The French and European space agencies have received no word from the US Air Force in the month since the Feb. 3 debris-producing explosion aboard a military weather satellite in a heavily trafficked orbit but said they hadn’t expected any.

These officials said nonetheless that if the Air Force’s Joint Space Operations Center (JSpOC) had concluded that debris from the DMSP-F13 satellite’s explosion placed a European satellite at risk, JSpOC likely would have sent out a notification in the days following the event, according to spacenews.com.

But Europe’s meteorological satellite agency, Eumetsat of Darmstadt, Germany, was informed by its counterpart, the U.S. National Oceanic and Atmospheric Administration, of an “emergency de-commissioning” of a satellite on Feb. 4 — the day after the event, Eumetsat said March 5.

The satellite broke apart in an orbit above our [Metop satellites], therefore the incident did not constitute an increase in risk to Eumetsat satellites. This is why we did not receive any warning. We are therefore confident that our Metop satellites are not threatened, and are ready to maneuver in response to any warning.”

The 20-year-old U.S. Air Force Defense Meteorological Satellite Program Flight 13 satellite exploded at about 830 kilometers in altitude in polar sun-synchronous orbit Feb. 3, producing a debris field numbering around 40 pieces that are large enough to be tracked.

So far, the identified debris pieces have mostly stayed in the vicinity of the main body of the satellite. Debris experts say that if 40-plus pieces are trackable, it’s safe to assume more than 100 pieces were created in the explosion.

That is a heavily used orbit for polar-orbiting weather satellites, with U.S. civil, European, Russian and Chinese spacecraft in orbit providing services similar to the mission of DMSP-F13.

Satellite-tracking analysts were the first to notice the event in the days and weeks following the explosion.

But the Air Force’s silence until weeks after the event should not be considered abnormal or problematic, said Holger Krag, head of the European Space Agency’s Space Debris Office, located at the agency’s space operations center in Darmstadt, Germany.

“There has never been a policy of communicating on events like this, and no formal communications means exists for this kind of event,” Krag said. “We feel we were always covered operationally given the much-appreciated warnings given to us [by JSpOC], even of classified objects.”

ESA and several European governments, including France, maintain their own modest space-object-tracking facilities, but despite a more-elaborate Russian government network the U.S. Defense Department’s system of ground and space-based sensors is the current gold standard for space surveillance.

The Air Force in recent years has increased its dialogue with commercial and non-U.S. government operators, especially since the February 2009 collision of an active Iridium mobile communications satellite and a dead Russian spacecraft.

Krag said ESA currently operates no satellites at the 800-kilometer altitude. It has a couple of environmental spacecraft orbiting about 100 kilometers lower. But its Sentinel 2A Earth observation satellite, scheduled for launch later this year, will be put into a 786-kilometer orbit.

The French space agency, CNES, has its Spot 5 Earth observation satellite, nearing retirement, orbiting at 825 kilometers but views the risk from DMSP-F13 as minimal.

“The only thing to say really is that the trend continues,” said Christophe Bonnal, a space debris expert at CNES. “I would qualify this particular event as minor. There is not much ejected matter, and if no more debris is produced then this is not especially worrisome. But this is a valuable orbit and the amount of debris in it is rising. Remember it was around this same orbit where China used a missile to destroy one of its own retired satellites in 2007, creating thousands of pieces of debris.”

Bonnal agreed with Krag that the lack of communication from the Air Force was neither surprising nor objectionable.

But if neither CNES nor ESA have many spacecraft in the 800-kiometer orbital region, other nations do. The U.S. National Oceanic and Atmospheric Administration (NOAA), Europe’s Eumetsat meteorological organization and corresponding agencies in China and Russia — in addition to the U.S. Defense Department — all maintain meteorological spacecraft in orbits of between 800 and 850 kilometers.

Bonnal said he counted 51 spacecraft in that orbital range.

Krag said one unusual aspect of he DMSP-F13 explosion is that it occurred on a satellite that, despite its advanced age, was still in operation. This permitted the Air Force to receive telemetry at the time of the explosion and temporarily conclude that a spike in battery temperature was a likely cause.

“Operating this long in this orbit is unusual. We all know that technical reliability goes down over the years, and 20 years is a very old satellite in [low Earth orbit].”