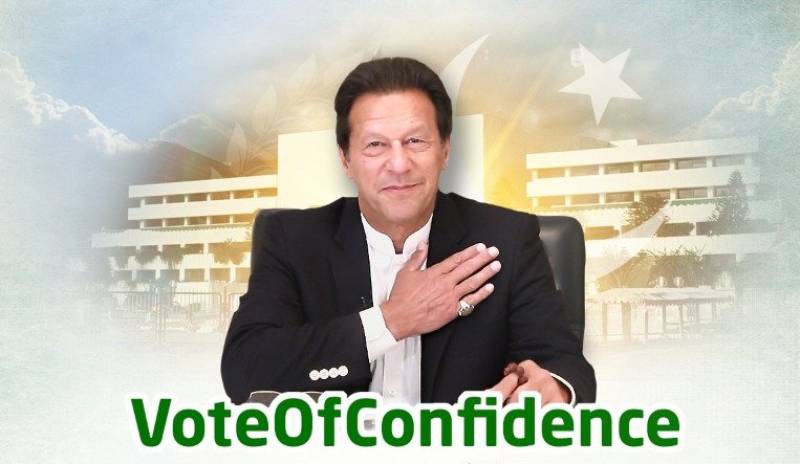 ISLAMABAD – Prime Minister Imran Khan on Saturday won the vote of confidence with a majority vote in the National Assembly after upset in Senate Elections.

NA session was called in a show of strength by Khan himself after PTI lost a crucial seat in the Senate elections. Speaker Asad Qaiser said that eight years ago, Imran Khan had been elected to the post with 176 votes. “Today, he has secured 178 votes,” Speaker added.

Earlier, lawmakers, including PM Imran, arrived at the Parliament House while PTI supporters and PML-N leaders gathered outside.

The NA session started with the recitation from the Holy Quran. Foreign Minister Shah Mahmood Qureshi tabled the resolution in the National Assembly regarding Imran Khan’s vote of confidence.

Prime Minister Imran Khan has reached the National Assembly to seek a vote of confidence, days after the country's ruling coalition lost a crucial Senate seat.

Meanwhile, dozens of PTI supporters have gathered outside the Parliament Lodges, holding up banners and chanting slogans in support of PM Imran.

The lower house of the Parliament will meet at 12:15 pm for this purpose. Khan volunteered to face the confidence vote after his Pakistan Tehreek-e-Insaaf (PTI) party's candidate was defeated in a Senate election by a former prime minister earlier this week. The opposition candidate secured 169 votes compared to 164 for Khan's party's candidate, who is the incumbent finance minister.

The defeat means the government no longer has a majority in the parliamentary chamber that elects the prime minister.

Khan, who is midway through his five-year term, needs 172 votes in the 342-seat National Assembly to retain the confidence of the house. PTI has 157 MPs in the lower house. Khan was backed by 176 members when elected prime minister in 2018.

On Friday, the multi-party opposition alliance Pakistan Democratic Movement (PDM) announced that the opposition would boycott the special session.

Pakistan Tehreek e Insaf workers have reached outside the parliament to express solidarity with Prime Minister Imran Khan. Shehryar Afridi, Fawad Chaudhry, and Nafeesa Khattak along with other politicians arriving for the NA session.

Imran Khan had announced earlier this week that he would seek a vote of confidence from his party’s lawmakers, following an upset in the Senate election on March 3.