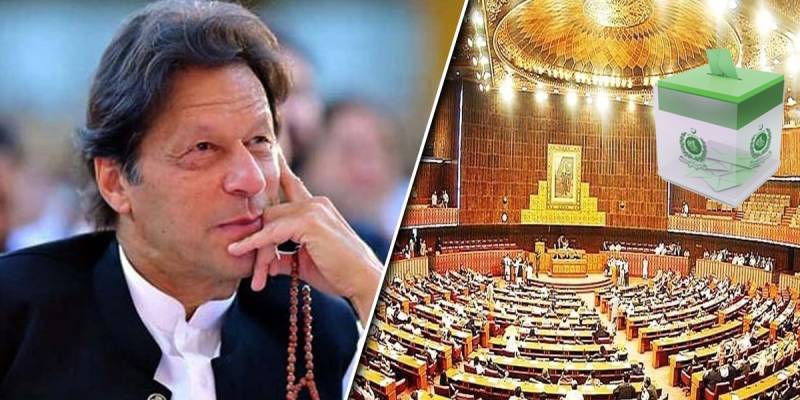 The ruling alliance has 181 votes in the 341 members National Assembly whereas the opposition has 160 votes. The Prime Minister will have to get 171 votes.

PTI has 157 members in the National Assembly, while its allies include the MQM-Pakistan has seven seats, the PML-Q and the BAP have five seats each, All Pakistan Muslim League and the Jamhoori Watan Party have one seat each while two independent members are also on the side of the Imran Khan’s government.

Under the rules of the National Assembly, a bell will ring for five minutes to ensure the presence of all makers in the House before proceedings begin. All of the doors leading to the Lobby will be closed afterward and no one inside will be allowed to leave or enter.

The Speaker of the house then reads out the resolution pertaining to confidence in the Prime Minister and asks the members who wish to vote in support of the resolution to pass in single file through the entrance where there will be "tellers" posted to record each member's vote.

Every member shall reach a teller's desk and call out the division number allotted to them. Following that the teller will then indicate the member's name on the division list while calling out their name.

Every member is required to stop and clearly hear their name being called out before moving off so that their vote can properly be recorded. They must leave the Chamber and not return until bells will ring again.

ISLAMABAD - Prime Minister Imran Khan said on Thursday that he is going to seek the vote of confidence from the ...

Afterward, the secretary will count the members on the list and present the result to the Speaker. Bells will ring again to call back the lawmakers to the Chamber. The result will be announced by the Speaker after all of the members will return.

A resolution for a vote of confidence under rule 36 will pass or reject after the result.

ISLAMABAD – Prime Minister Imran Khan Friday said that he has a lot of respect for Pakistan Muslim League-Quaid ...