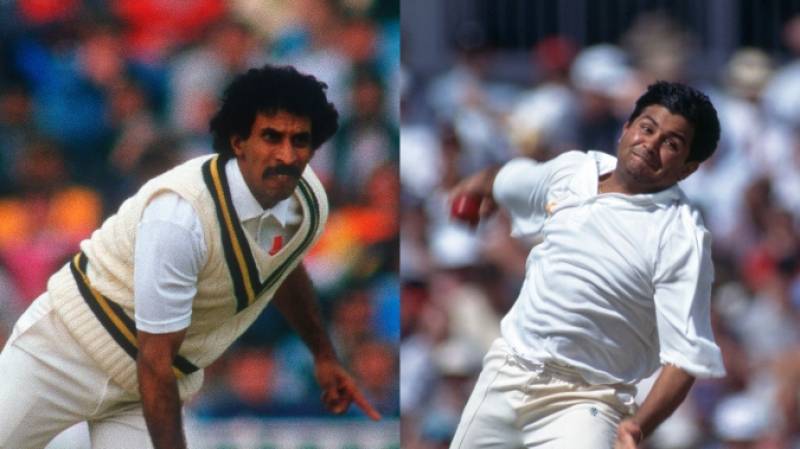 LAHORE - PCB’s Dream Pairs series for Test players has gained great popularity among the fans, current and former players, pundits and journalists. The campaign entered its fourth phase on Tuesday, 5 May, with the fans asked to name two spin bowling pairs of their choice.

Former Test off-spinner Tauseef Ahmed named his former colleague and co-hero of the famous 1987 Bangalore Test victory Iqbal Qasim as his dream partner from yesteryears before naming former leg-spinner Mushtaq Ahmed as his other partner.

Tauseef Ahmed, who took 93 wickets in a 34-match-long Test career, said: “I am very lucky that in my career I played with the likes of Abdul Qadir and Iqbal Qasim. If asked to pick one spinner as my partner, I would go for Iqbal Qasim who partnered with me in the famous 1987 Bangalore Test win.

“The performance we gave in that Test match is for all to see and remember. Iqbal remained very helpful and mentored me throughout my career.

“I would also like to choose Mushtaq Ahmed as my other partner. Although, I didn’t play much with Mushtaq, I always admired his skills and temperament. Mushtaq was a very exciting player and never used to get fazed by any situation. He was an attacking bowler who used to take on the batsmen and crack jokes while bowling. We played together for UBL and Mushtaq’s temperament and bravery always stood out for me.”

Mushtaq Ahmed, who took 185 wickets in 52 Tests, said: “I want to thank Tauseef Ahmed for his complements for me. When I started playing for UBL he was there as a mentor, role model and  someone who always supported me.

“Among former cricketers I would like to name Saqlain Mushtaq as my bowling partner. Although I played a few matches with Abdul Qadir,I chose Saqlain as Qadir and I were similar bowlers while Saqlain being an off-spinner provided variety.

“Saqlain and I featured in a lot of matches and were part of many victories. Among recent cricketers, I would want to bowl with Yasir Shah. Yasir has sped his way to 200 wickets in Test cricket and has broken many records. It would be an honour for me to bowl with Yasir.”

The criterion for selection of the spinners is a minimum of 75 Test wickets.

The activity acknowledges the services of former and present stars of Pakistan cricket. Before the spinners, the campaigns for fast bowlers, openers and middle-order batting pairs received tremendous response.

Among openers, the 90s batting greats Saeed Anwar and Aamir Sohail (qualification minimum 1,000 runs as opener) came out as the most popular pair.

The famed left-handed pair was followed by Saeed Anwar’s paring with Majid Khan, regarded as one of the most stylish and productive openers produced by Pakistan.

The two-day long spinners’ campaign will be followed by dream pair of all-rounders and most popular wicketkeeper and captain.