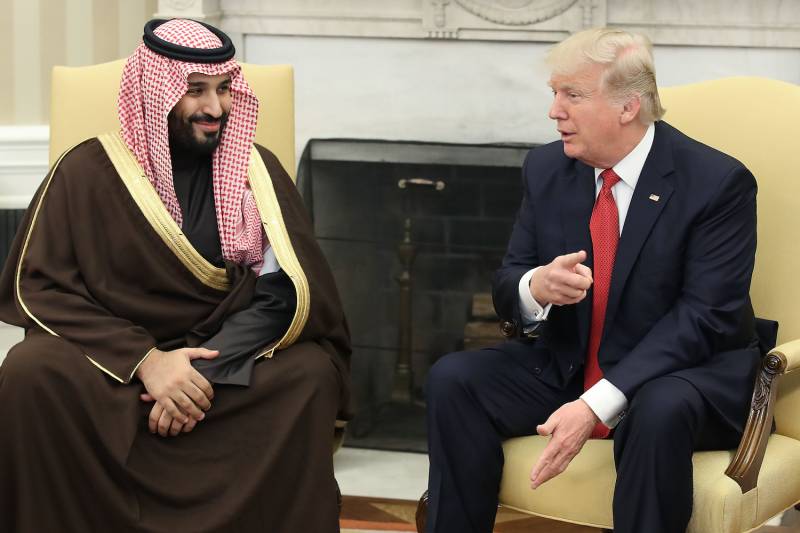 RIYADH - Saudi Arabia's Crown Prince, Mohammed bin Salman has brushed off comments made by US President Donald Trump that Washington is 'subsidizing' the kingdom's military, insisting that the kingdom has always paid for armaments from the US.

'Ever since the relationship started between Saudi Arabia and the United States of America, we've bought everything with money,' the 32-year-old prince told Bloomberg in an interview, saying he loves to work with the US leader.

On the comments of Trump that the Saudi leadership would survive for two weeks without Washington's support, the crown prince highlighted that Saudi Arabia was there before the United States of America and it’s there since 1744.

He also fired a broadside at former US president Barack Obama, while lavishing praise at the incumbent leader.

'I believe, and I’m sorry if anyone misunderstands that, but President Obama, in his eight years, worked against many of our agenda – not in Saudi Arabia, but also in the Middle East,' said MBS, as he is called.

He continued that Saudi Arabia needs something like around 2,000 years to maybe face some dangers while watering down the comments made by Trump.

'Well, you know, you have to accept that any friend will say good things and bad things. So you cannot have 100 percent friends saying good things about you, even in your family. You will have some misunderstandings. So we put that in that category,' he said in response to US leader's remarks.

When asked whether U.S.-Saudi relations were just as good as they were 24 hours ago before the President said these things, the Saudi leader replied in the affirmative, saying if you look at the picture overall, you have 99 percent of good things and one bad issue.

'I love working with Trump. I really like working with him and we have achieved a lot in the Middle East, especially against extremism, extremist ideologies, terrorism and ISIS that disappeared in a very short time in Iraq and Syria, and a lot of extremist narratives have been demolished in the past two years, so this is a strong initiative,' he said to a group of journalists.

Last week Trump asked at a rally "when you have wealthy countries like Saudi Arabia, like Japan, like South Korea, why are we subsidising their military?"

'They'll pay us. The problem is nobody ever asks,' he said and affirmed that Saudi leader King Salman would not last for two weeks without Washington's support.