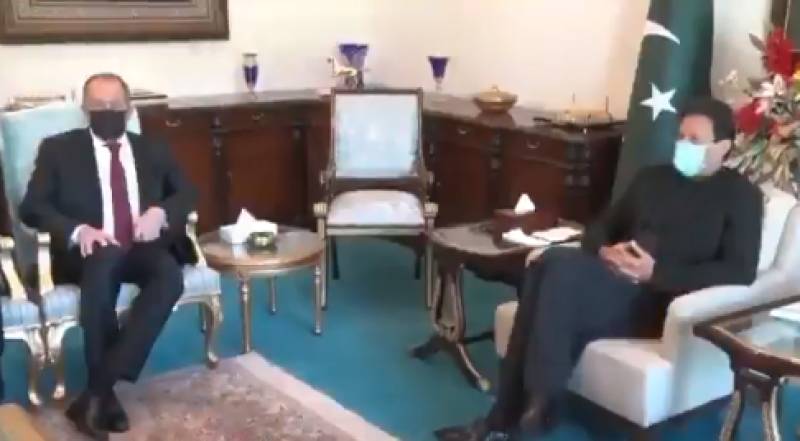 Talking to Russia Foreign Minister Sergey Lavrov, who called on him in Islamabad on Wednesday, the premier reiterated the importance Pakistan attaches to its relations with Russia as a key foreign policy priority. He expressed satisfaction at the steady growth in bilateral ties, including deepening cooperation in trade, energy, security and defence.

Enhanced bilateral cooperation in the fields of energy, industrial modernization, railways and aviation was discussed. It was agreed that the Inter-Governmental Commission, due to meet in Moscow later this year, would closely pursue specific proposals and projects in this context.

Exchanging views on the health and economic challenges posed by the COVID-19 pandemic, Khan congratulated Russia on its development of Sputnik-V vaccine and underscored Pakistan's procurement plans in this regard.

Prime Minister Imran Khan reiterated the importance Pakistan attaches to its relations with 🇷🇺 as a key foreign policy priority. He expressed satisfaction at the steady growth in bilateral ties, including deepening cooperation in trade, energy, security and defence. pic.twitter.com/yU1SlRRDGN

In the regional context, he stressed the importance of a negotiated political settlement of the conflict in Afghanistan. PM Imran said Pakistan appreciates Russia's efforts in promoting the Afghan peace process including through the hosting of the recent meeting of Extended Troika in Moscow.

With reference to the situation in IIOJK, Khan shared Pakistan's perspective on issues of peace and security in South Asia, including the need for peaceful resolution of the Jammu and Kashmir dispute.

The Pakistani premier also reiterated his invitation to President Putin to visit Pakistan at his earliest convenience.