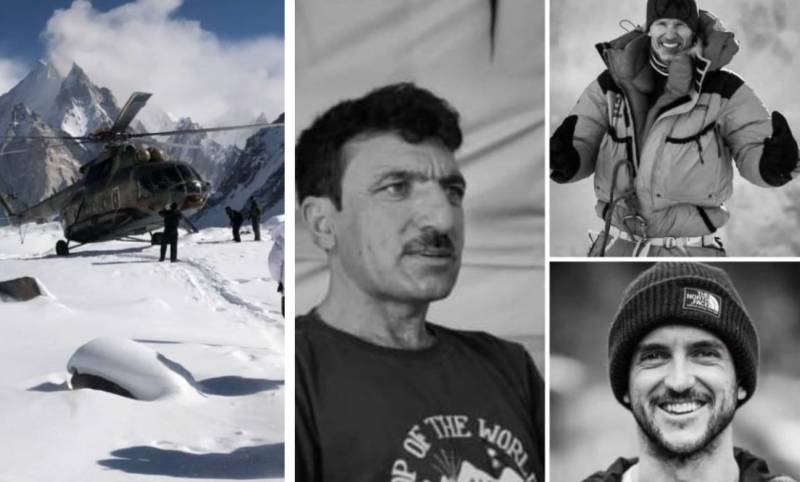 Three of the missing mountaineers have not contacted since Friday. Two of the Pakistan Army choppers started a search and rescue mission to find the missing climbers who at the time had not been contacted for over 30 hours. Another search operation is underway today.

According to SST team leader Chhang Dawa Sherpa said the helicopter made a search flight almost up to 7000 meters and returned back to Skardu, the search operation can't trace anything, he added.

Sherpa further added that the condition in the ‘savage mountain’ and even at the base camp is getting poor.

• Army's Helicopter made a search flight almost up to 7000m and returned back to Skardu, unfortunately, they can not trace anything.#k2expedition #k2winter #k2winter2021 #karakorum #sherpa #nepal #pakistan #mountaineering #expeditionk2 #alpinism #wintersummitk2 pic.twitter.com/coemzonVnU

Prayers needed from everyone for their safe return," he said on Twitter.

PM @ImranKhanPTI & COAS Gen Qamar Bajwa are concerned and personally following all developments regarding our missing mountaineers. High alt porters & Lama helis will restart search at the crack of dawn.

Prayers needed from everyone for their safe return!#k2winterexpedition2021

President Dr. Arif Alvi also took to Twitter and expressed concern over the missing mountaineers. Alvi hoped they were alive and fine. These are very brave mountaineers. We pray for their safety, he added.

I hope Ali Sadpara and his co-climbers are alive and fine. These are very brave mountaineers. We pray for their safety. Good information in your thread. https://t.co/1dsXM3T6HH

Earlier on Friday, a Bulgarian mountaineer died after fell off his safety rope during an expedition on K2 in Pakistan. Seven Summit Treks — a trekking company leading the expedition — said Atanas Skatov fell when he was trying to descend to basecamp 3 of the world’s second-highest peak.

ISLAMABAD – A Bulgarian mountaineer died after fell off his safety rope during an expedition on K2 in Pakistan, ...