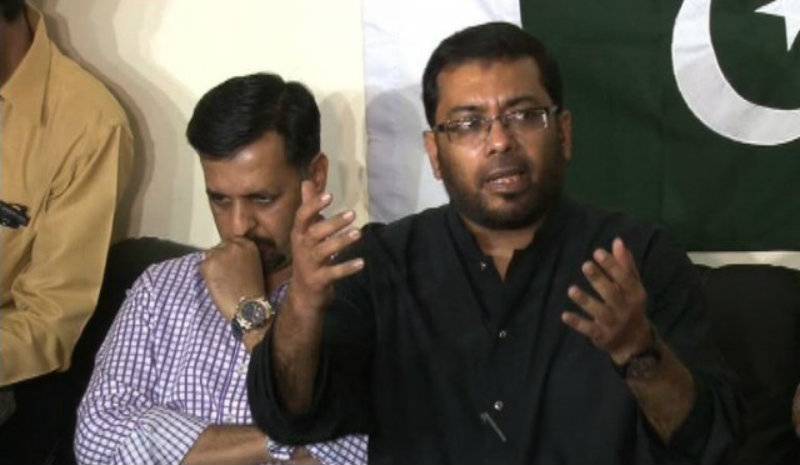 KARACHI (Staff Report) - Former MQM leader Dr Sagheer Ahmad on Monday became the third member of a new party founded by ex-mayor of Karachi Mustafa Kamal after his dramatic return to the politics in Sindh capital.

During a press conference here, former provincial health minister announced his decision to join the two-member party which is unnamed yet and holds the national flag as its party flag.

He was was flanked by his former party colleagues Mustafa Kamal and Anees Qaimkhani.

Dr Sagheer, in an emotional speech, criticised the 'absurd' policies of the MQM chief and party manifesto lacking focus on education and other key sectors.

The former MQM stalwart also attacked the intoxicated speeches of Altaf Hussain, adding morphine injections to the list of 'luxuries' the MQM chief is enjoying in London. "Can any sensible person listen to those speeches (made by Altaf Hussain) with his family," he questioned.

"I am here because I am going to stand alongside Anees Qaimkhani and Mustafa Kamal and play a positive role in helping Pakistan grow," said Mr Ahmed.

"It was not possible for me to subdue my conscience and I salute Kamal and Qaimkhani for speaking the truth."

In August 2014, the MQM had removed Dr Sagheer Ahmed and deputy convener Nasir Jamal from its Coordination Committee (CC).

Dr Sagheer Ahmed said that he had a tough time at home for defending Altaf Hussain “who doesn’t even hesitate to talk about obvious yet immoral things (sex) in his speeches”.

"Karachi has been exploited in front of everyone. I sacrificed everything for the tehreek (political party)," he added.

He elaborated that he, along with all the other party members had served Altaf as if he was a god.