How schools are cheating their teachers while charging exorbitant fees 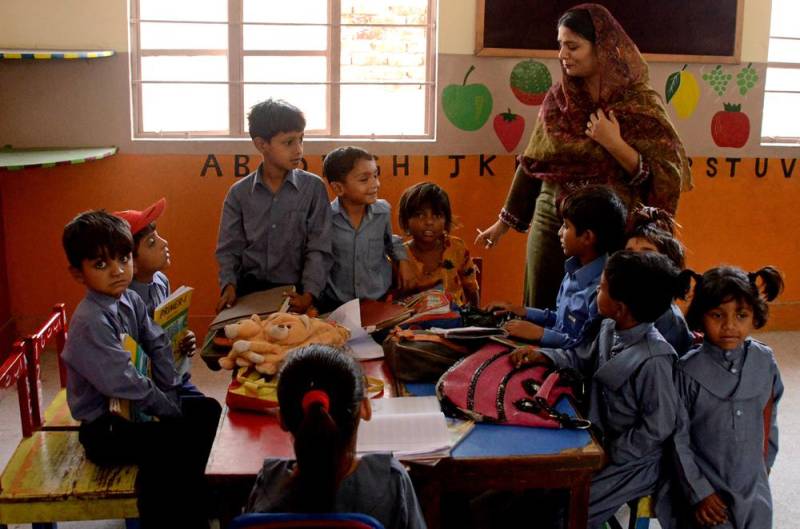 KARACHI - Numerous schools in Sindh have been deceiving their teachers for years, by underpaying them while charging an exorbitant fee from the students.

According to the Sindh Private Educational Institutions (Regulation and Control) Ordinance, 2001, the compensation of a teacher imparting education in private schools, shall not be less than four times the fee of a single student of the highest class charged by the institution, a clause grossly violated by the schools.

As per the estimates of 'The Karachi School's Fees' - KSF page on Facebook, certain schools in Pakistan's biggest city, Karachi are charging over a hundred thousand rupees per month from each pupil, implying that the minimum salary of each teacher linked with such schools should be around Rs 400K, for full-time teachers with a continuous service of at least a year, however, such is not the case in practical.

One of the most expensive schools in Sindh is BeaconHouse and the fee charged by it for A-Levels is approximately Rs 37000, making them liable to pay Rs 148,000 to its teachers associated with it for A-Levels, as per the injunctions highlighted in the Sindh Private Educational Institutions (Regulation and Control) Ordinance, 2001.

Apart from the elite schools mentioned above, City School (PAF Chapter) also receives Rs 32,500 in terms of fee for A -Levels suggesting that it should be paying Rs 130,000 to each teacher per month, however, such compensation is not vividly rewarded to the educators.

Likewise, Cedar College's fee per month is 32,000 for A-Levels and so the salary of each teacher employed with the institute comes out to be Rs 128,000, according to regulations, though such is not paid to the scholars.

Nixor, Civitas, Bayview Academy, Generations, Lyceum, Avicenna School and other educational hubs also demand huge amount of fee from the students, however, the teachers hired by these institutes (and many others) are paid salary in nuts, flouting the legal injunctions.

Not only the private schools are paying their educational staff in flagrant contradiction with the rules, the schools managed by a trust are also bound to remunerate their staff at least at par with the government pay scale, however, the trust or community schools also violate the law.

The breach of rules, that too by the institutes designed to inculcate knowledge and wisdom, is going to irk the educators, which have been exploited by the private schools owing to mass unemployment and weak implementation of rules and regulations.

A teacher who worked with BeaconHouse School System for 2 years shared her side of the story substantiating that the private schools were exploiting their staff.

In her Facebook post, the teacher revealed that the said school charged Rs 15,000 per month from a kindergarten child whereas the compensation paid to the teacher was Rs 24,000 while the one working at a junior position received merely Rs 15, 000 per month. 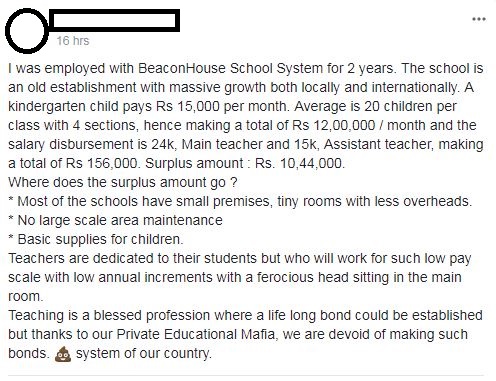 Estimating what the schools earned per month, after settling the remuneration, the amount comes out to be staggering Rs 10,44000 per month, as mentioned by the teacher, raising eyebrows about whether the private institutes were inculcating knowledge or 'minting money' under the guise of imparting education.