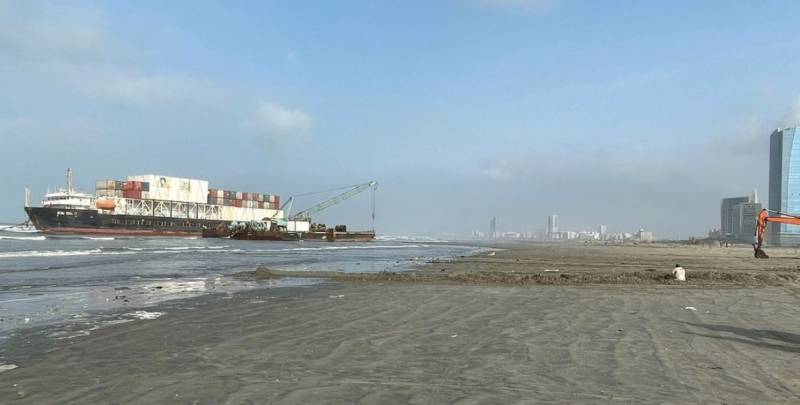 KARACHI – The cargo ship stranded on the shores of Karachi for 49 days has finally been rescued and taken to the deep sea, local media reported Tuesday.

The giant vessel MV Heng Tong 77 was rescued after multiple efforts as it was grounded at the coast since July 20. The ship has already been 2000 meters into the sea from the coast where it was stranded in July.

Earlier, the salvage teams halted operations because the weather turned inclement. The operation was postponed till September 7.

KPT finally managed to pull out the ship stranded on the SeaView shore of Karachi for almost a month and a half, following several unsuccessful attemptspic.twitter.com/m0nGrL3sK1

The company which was assigned to resume the salvage work stated that they started the operation with a new approach on Tuesday. The ship was tied with new and stronger ropes which were brought from Gadani, Balochistan, and then the vessel was pulled by a crane on a barge.

The engine of the vessel was started after it was moved around 600 meters into the ocean.

The recent attempt has been carried out with the help of an expert salvage master, two crane barges, and two tugs. Earlier, the ship was failed due to a number of factors including inexperienced teams.

On July 18, the ship was en route to Istanbul from China when it drifted and grounded near the Karachi beach. The ship remains stranded for around 50 days, as it was not possible to run its engines in shallow waters.

Special Assistant to Prime Minister on Maritime Affairs said since the ship has been refloated and is now in the safe waters, it will be taken into custody for probe.

The maritime affairs ministry and Karachi Port Trust have ordered inquiry reports on why the previous salvaging endeavors were failed wherein the shipowner was asked to furnish steps he took for the extrication.