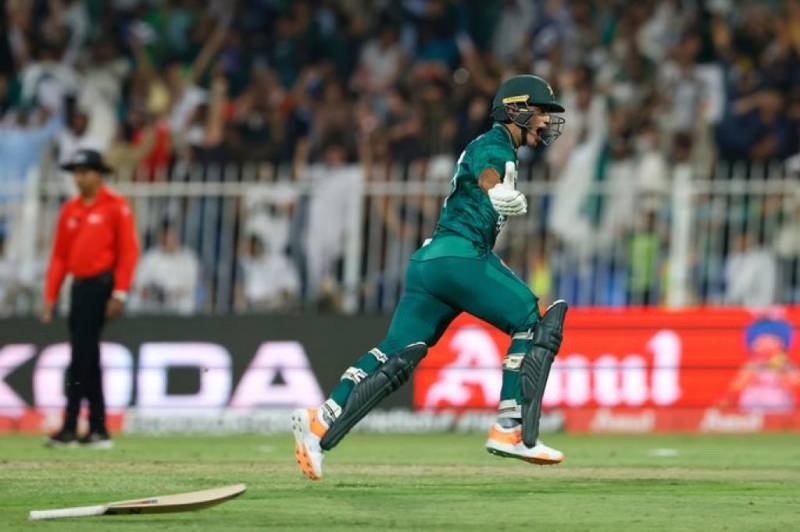 The 19 years old smashed two consecutive sixes in the final over, snatching a nearly achievable victory from the hands of Afghanistan.

Chasing a simple target of 130, the top order of the Pakistani squad tumbled, and Naseem was the last player who hits back-to-back shots in final over to win nailbiting thriller.

Unbelievable end to the #AsiaCup2022 game!

Naseem Shah wins it for Pakistan in the final over with one wicket left 😯#PAKvAFG | #AsiaCup2022 | Scorecard: https://t.co/4ppyUfkluv pic.twitter.com/F1A0B3DoSC

Afghan bowling side have displayed A-game as they sent Pakistani skipper Babar Azam, Fakhar Zaman and Mohammad Rizwan early but the partnership between Shadab Khan and Ifthikhar Ahmed put Men in Green back.

Iftikhar Ahmed was then outclassed which gave Afghanistan a glimmer of hope once again.

Nabi-led squad then continues to thrash the middle order at regular intervals to push Men in Green out of the game while two other promising players Nawaz and Asif Ali failed to deliver.

In the first half of the game, Afghanistan’s opening side tumbled; Rahmanullah Gurbaz (17) and Hazratallah Zazai (21) returned to the pavilion as their innings got derailed.

Young blood Ibrahim Zadran remains the top scorer with 35, despite the efforts the Afghan side post 129, far less than what cricket pundits predicted before the clash.

Earlier, Pakistan won the toss and opted to bowl first against Afghanistan in the Super Fours game in the ongoing Asia Cup 2022 tournament at Sharjah International Stadium.

🏏 Pakistan win the toss and opt to field first 🏏

The two teams have faced off twice in the format with Pakistan coming out victorious both times. The record win against Hong Kong and Super-4 triumph over India have given Pakistan the desired momentum ahead of what promises to be another exciting contest, while Afghanistan, after a perfect group-stage campaign, enter the contest following a loss to Sri Lanka.

India and Afghanistan will be sent packing from the tournament if Pakistan managed to secure win in today’s match, thus, they will play the final match against Sri Lanka.

Pakistan’s head coach Saqlain Mushtaq while talking about today’s match said, “Afghanistan are a good side and they have shown that from time to time, but we are confident to get a hat-trick of victories on Wednesday”.

“The conditions in Sharjah will be suitable for spinners, but if a batter spends enough time in the middle, there will be a lot of runs on offer in the latter part of the innings with shorter boundaries,” he said.

DUBAI – Sri Lanka completed a hat-trick of wins in Asia Cup 2022 after beating India by six wickets at the Dubai ...