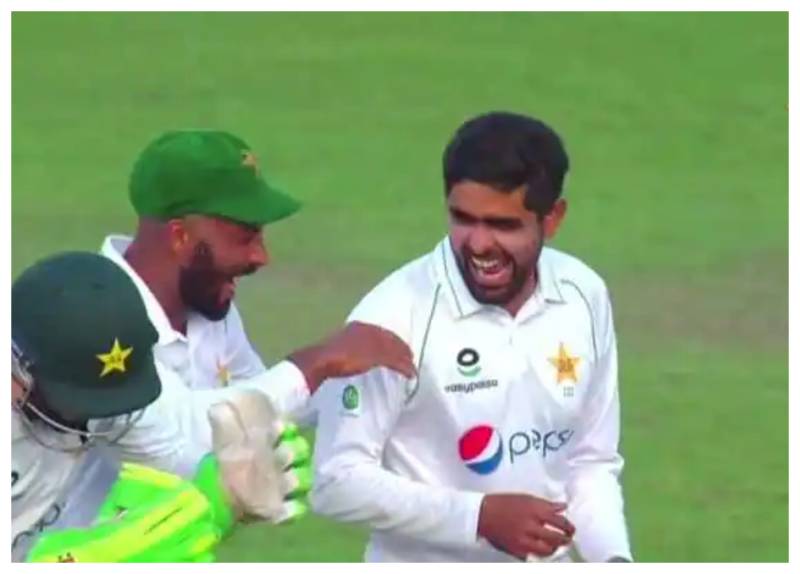 LAHORE – Pakistan skipper Babar Azam on Wednesday displayed his bowling skills and claimed his maiden wicket in international format at a crucial point while playing against Bangladesh in second Test match in Dhaka.

After his appeal for the LBW was turned down, he successfully got the umpire’s decision overhauled after reviewing it.

The skipper, in the second innings, bowled two overs, and only conceded a run.

A video circulating on social media shows the whole is excited to see their skipper take his first wicket.

Babar Azam on the incredible win in Dhaka Test and his first Test wicket#BANvPAK #HarHaalMainCricket pic.twitter.com/2cGayPJIcK

Babar-led squad has completed a 2-0 sweep of the Test series against Bangladesh, sealing victory at the Sher-e-Bangla National Stadium in Dhaka earlier in the day.

On what turned out to be a thrilling day for the lovers of Test cricket, Bangladesh, being forced to follow-on after managing a paltry 87 in reply of Pakistan’s strong 300 for four, battled to eke out a draw, but they failed one by one to answer the questions posed by the touring bowlers and were bowled out for 205.

In a befitting manner, Sajid Khan, who finished the match with 12 scalps after recording career-best eight for 42 in the first innings, snared the last wicket as he trapped Taijul Islam LBW.

DHAKA – Babar-led squad has completed a 2-0 sweep of the Test series against Bangladesh, sealing victory at the ...