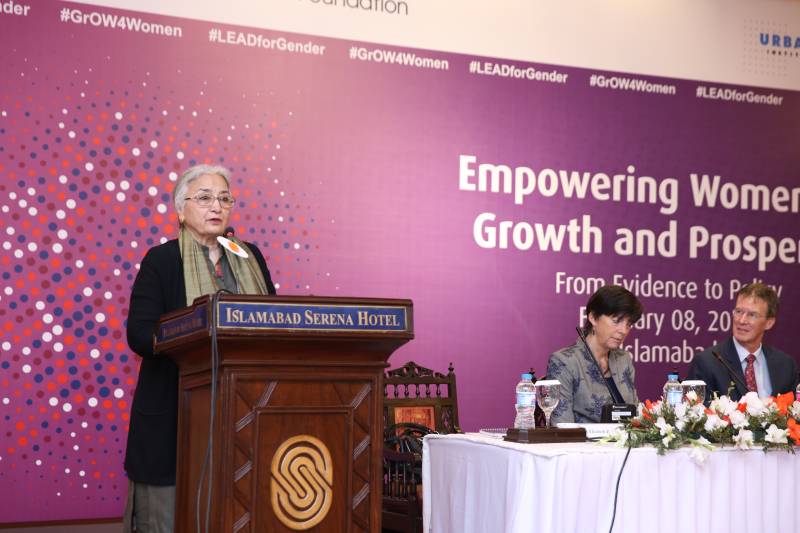 ISLAMABAD - The leadership of Environment and Development (LEAD) Pakistan, an independent policy think-tank, organised an international conference in the federal capital on Thursday.

CEO Ali Tauqeer Sheikh gave the welcome note at the start of the conference - ‘Empowering Women for Growth and Prosperity: From Evidence to Policy’ - and referred to a study by LEAD Pakistan which explores environmental degradation, climate change and economic empowerment of women based on a household survey conducted in Dhaka, Delhi, Lahore and Islamabad.

“Women are particularly vulnerable to climate change events and environmental degradation in urban areas. There is a dire need for smart and inclusive policy-making by the government to ensure that no one is left behind,” he said.

KhawarMumtaz, Chairperson, National Commission on the Status of Women in Pakistan referred to Vision 2025 which is a ‘guiding light for development’ in Pakistan.

He said, “Women’s contribution does not get highlighted in statistics and there is a need to highlight their efforts for the betterment of the society. Women contribute 400 billion rupees a year but that is not highlighted appropriately and still the nexus between phenomenal work and women empowerment is not examined as yet. We have also not linked the impacts of climate change on women and the opportunities associated with it.”

Joanna Reid, Head of Department for International Development (DFID), Pakistan said, “No country has achieved prosperity without harnessing the potential of women. Unfortunately, in Pakistan, women are disproportionately affected by many issues. There is a need to provide better education to women and girls and empowering them to make their choices by themselves. DFID is supporting Pakistan in achieving sustainable development.”

“We are pleased to support the research initiatives that can help to inculcate gender in the economic agenda. The sustainable development cannot be achieved if women aren’t the part of the development agenda. Unfortunately in Pakistan, women face issues to their participation on various avenues.

“Climate change is another area of concern, as it has greater impact on those who rely on natural resources for their livelihoods which includes women aswell. Women can play a greater role in fighting climate change due to their local knowledge,” he added.

There were three panels on ‘Putting women to work – human capital, growth and labor markets’; ‘Pathways to reducing women’s vulnerability to climate shocks and stressors’and ‘The economic costs and solutions to violence against women’.

The second panel ‘Pathways to Reducing Women’s Vulnerability to Climate Shocks and Stressors’ was moderated by Gillian Dowie and one of the presenters HinaLotia, Director Program, LEAD Pakistan said: “Heatwaves and torrential rains in Pakistan and India affect women more as compared to men and there is a need for gender sensitize development in South Asia. Further there are similarities and dissimilarities between urban dwellers in Delhi, Dhaka, Lahore and Islamabad, which LEAD Pakistan through one of its projects is trying to investigate.”

The third panel ‘The Economic Costs of and Solutions to Violence Against Women’ was moderated by Ali Tauqeer Sheikh and various presenters shared their views on the subject.

As global rankings on gender disparities list Pakistan among the worst in the world, the conference aimed to stir a greater debate calling for female participation in economic activities, which will promote sustainable and inclusive economic development in the country.