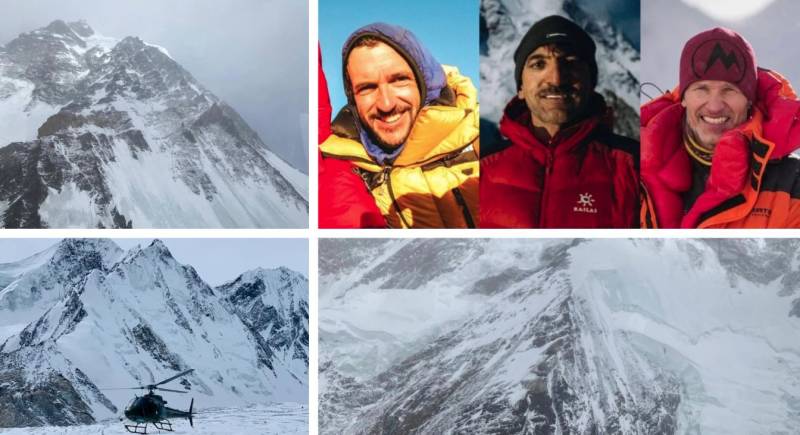 SKARDU – The search and rescue operation for Pakistani mountaineer Muhammad Ali Sadpara, Iceland’s John Snorri, and Chile’s Juan Pablo Mohr entered day three with all hoping for a miracle to find the 'nation’s hero' along with foreign hikers.

In a Facebook post, he wrote, "Army Aviation 5 squadron started the operation. We had less visibility as the upper mountain is covered in clouds."

• Today we were able to make search flights all over 7000m by 2 Army helicopters with the help of the Army Aviation 5...

Earlier on Sunday, the brave son of Muhammad Ali Sadpara, while speaking to the media reporters in Skardu said that the chances of survival of his father are very thin, as the weather at the top is extremely unpleasant for human survival.

The heartbroken Sajid added that rescue operations now only make sense if they are carried out to bring back his body.

Adding that his father must have summited the peak, and was on his way back after which he encountered an accident, which is why he is missing.

Two army helicopters flew to their maximum limit of around 7,800 meters for the aerial search to locate the missing mountaineers on Saturday. The teams failed to find any signs of the three.

Several experts, including local high altitude climbers and other members of the SST winter expedition team are part of the search and rescue mission.

Earlier on Friday, it had been reported that Ali Sadpara and his team had successfully summited the second-highest mountain. Afterwards, their teams had alarmed that there has been no communication from their end since Friday.

Since the reports of them gone missing emerged, Pakistanis have joined hands and are praying for their safe return.

Pakistani mountaineer Ali Sadpara is our National Hero, We pray for the safe return of all 3 mountaineers who went missing during #K2 expedition,

Prayers for safe return of our hero Muhammad Ali Sadpara and his fellow mountaineers!

PM @ImranKhanPTI & COAS Gen Qamar Bajwa are concerned and personally following all developments regarding our missing mountaineers. High alt porters & Lama helis will restart search at the crack of dawn.

Prayers needed from everyone for their safe return!#k2winterexpedition2021