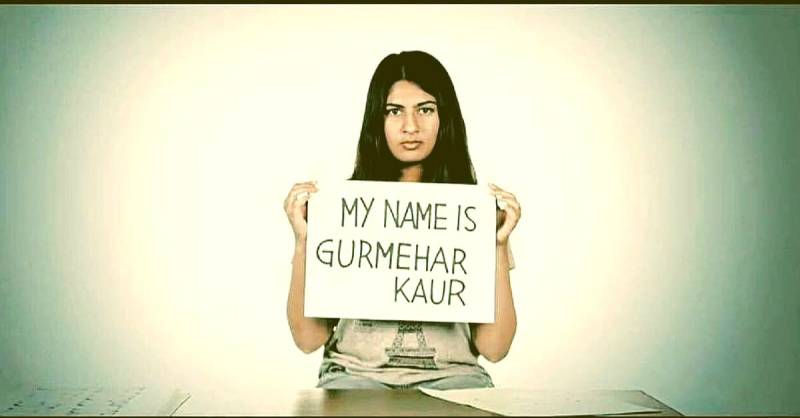 Intolerance and bigotry of the Hindu right-wingers have always prevailed in India since times immemorial. But it is shocking that their levels have taken such high proportions in recent years that even an innocent college student is not spared from life threats and fiery verbal attacks.

Gurmehar Kaur - a 20-year-old student of Lady Shri Ram College in Dehli, took to social media to express her disapproval against the heavy-handedness and bullying tactics of BJP's Student Wing, Akhil Bhartiya Vidyarthi Parishad (ABVP). Her message was innocuous; that she and the likes of her are not afraid of the threatening politics of ABVP in Dehli University. What she got in response were questions on her patriotism, slander and abuse and threats of rape by the extremist Hindu groups and a certain segment of general public in India.

About a year ago, Gurmehar Kaur came up with a strong message highlighting the ugliness of war with a placard in her hand which read: Pakistan didn't kill my dad; war killed him. Kaur - whose father died for his country during Kargil war in 1999, wasn't targeted at that time. But it is ironic that soon after she expressed her disapproval against ABVP's politics, her old videos resurfaced and she was branded anti-national.

Moreover, to add legitimacy to the hooliganism of ABVP goons some Indian celebrities and ministers joined the bandwagon against Kaur, making it impossible for the young student to carry on with her campaign against ABVP's threatening behaviour. In fact, a slander campaign has been initiated against the girl where fake videos are circulating highlighting her "immoral" character.

It is saddening to note that in India which claims to be the biggest democracy of the world, the freedom to express one's opinion; unless you are a rigid Desh Bhakt (hypernationalist), comes with an ugly cost. An air of intolerance is growing where matters are judged in the binaries of right and wrong. It is appalling to see a society where jingoism rules the roost and free thinkers and liberal artists, academicians, writers, film-makers and common people are questioned to prove their patriotism.

Earlier, Karan Johar - a renowned filmmaker in India, also faced a similar episode. He had to prove that he is loyal to his country by issuing an apology for casting Pakistani actor in his film. This, he had done to appease narrow-minded political workers of Maharashtra Navirman Sena and BJP, who continued to hound him with anti-national labels. However, later he revealed that he felt terrible to speak on his "nationalism and patriotism."

Patriotism is a concept that is within oneself, and it not for someone to judge or prove. But realistically, who can be more patriotic than Kaur for her father was a soldier and laid down his life for his country. Underlining the depravity and ugliness of war, and stressing on the urgency of peace with a rival country, is not anti-nationalism.

One lauds Gurmehar Kaur for her courage to denounce violence and promote peace. At such young age, she has locked horns with people known for their narrow nationalism and bigotry. Despite withdrawing from her campaign, she has gone with her head held high.