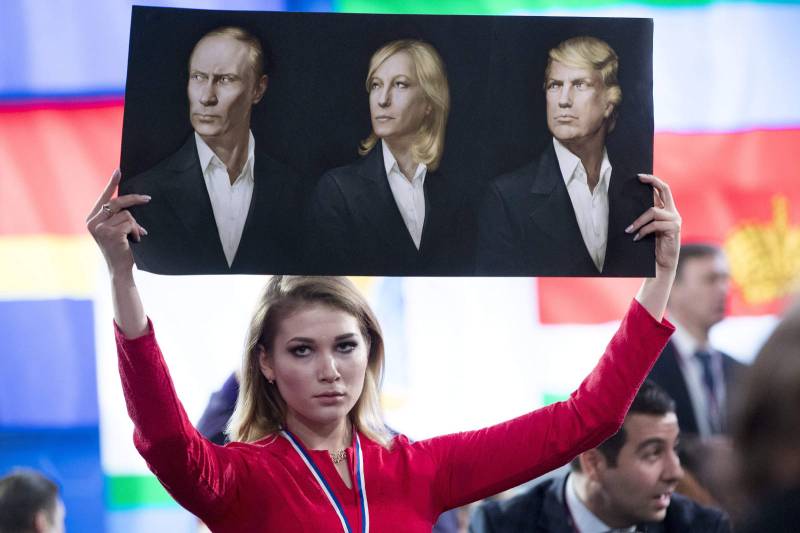 France has weathered the storm. Emmanuel Macron led the final round of vote by a margin of 65.5 per cent to Marine Le Pen’s 34.5 per cent. The 39-year-old won by a thumping lead, performing better than predicted. Still, his triumph may not be enough as over 4 million people returned blank ballots rejecting both the candidates. Distraught they are with the establishment but the French chose to snub xenophobia and racism in unequivocal terms. Bluntly put, the French nation maintained its intellectual superiority over the Americans and the British alike!

Center-left frontrunner Macron for French presidency started his victory lap exactly from where his right-wing opponent Le Pen left. "I know why some people have chosen to vote for an extreme party. I know the anger, the anxiety, doubts that so many of you expressed. And so it is my responsibility to take that on board," said Macron in his amazingly solemn speech. 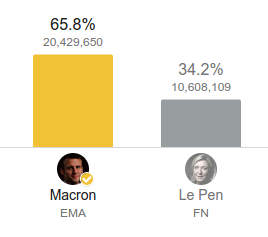 Much of his message as president-elect was focused on addressing the challenges facing France. Le Pen showed magnanimity too. "My fellow countrymen . . . the French have chosen a new president. They voted in favour of continuity. I have called Macron because I have the best interest of France in mind and I wanted to wish him the very best."

Macron and Le Pen have sharply contrasting views on immigration, integration and France’s role in the world. He contested on the promise of economic recovery and better border management while keeping them open. Le Pen boasts ultra-nationalistic and anti-immigrant positions, she inherited from her father Jean-Marie Le Pen who led the party for nearly forty years. Like Wilders, Le Pen also holds EU responsible for France many economic woes such as agriculture.

Now Macron will pick a colleague for the prime minister office who can deliver on the promises made on the campaign trail. In June, his budding political movement En Marche will reach out to the people for seats in the parliament.

Understandably, Macron’s first call after the win was to Angela Merkel, the unrivalled queen of Europe who weighed in for him while Moscow rooted for his opponent. Geert Wilders, the Dutch far-right politician who lost the Dutch elections but with a lesser margin, hoped that Le Pen will become French president in 2022. Donald Trump backed Le Pen too while Barack Obama favoured Macron. It looked less like a contest for the French presidency and more akin to the FIFA World Cup final. Hardly any major power was indifferent.

Plurality has won. The notion of share European security has won. The idea of a collective Europe has won. Interestingly Le Pen is not the prime loser but Russia’s Putin who has lost spectacularly. His unfair means to achieve disruptive ambitions for backdoor entry as an underground superpower have been frustrated. Russia won’t give up its bid to weaken Europe through its strength: its very own electoral process. The FSB-affiliated whistleblowers including WikiLeaks and Kremlin-supported websites have been all out playing their catalytic role but only to remain fruitless.

Where does Europe go from here?

After failing to take over France, the racists and xenophobes will attempt to mow the second pillar of European solidarity. In the final battles ahead, the neo-Nazis will be clamouring for consolation in Germany’s federal elections on September 24. Moreover, French parliamentary election is scheduled for June 11 and June 18 while Norwegian for September 11.

Stretching beyond hacked emails, purported Islamist attacks and false alarms, Putin will go every length to take over Germany by meddling in its parliamentary vote. The scenario in Germany is not particularly encouraging for the far right after its lead candidate Frauke Petry has withdrawn from the race. The AfD party, which has narrowly escaped what could have been a disastrous split, continues to focus its campaign against mass immigration and ‘the Islamization of the West’. Some of its leaders have gone so far to empower border guards to shoot at refugees trying to enter illegally in the wake of the migrant crisis.

Elections in Europe help the world figure if there is something called ‘good’ and ‘bad’ populism. The emerging face of populism mirrors the old classic: authoritarian and nativist. While becoming the prime battleground for anti-immigrants and populists, now Germans have the responsibility to save the European solidarity, institutionally recognised as the European Union. The importance of France not falling for Putin’s agenda can never be overstated. Not only it has a veto in the UN Security Council but also is a key military member of the NATO. Thankfully, Paris will neither become Putin’s voice in Brussels nor its region of influence.

The Dutch and French results have complicated the guessing game as to whether this is just a current phenomenon, or populism has peaked more widely. Is it there to stay? In 2011, UK’s Conservative Party chairperson Sayeeda Warsi had rightly stated that Islamophobia has "passed the dinner-table test" and become widely socially acceptable in Britain. Many analysts and human rights watchdogs had pointed out that Europe was not too aloof from the shocking trend. The difference between far right parties and the others largely is that the latter either finds its explicit use unsuitable to enter the power corridors or won’t use it for political means due to political correctness.

Let’s suppose that like Wilders and Marine Le Pen, Germany’s White supremacists also lose elections in September. Shall we conclude that racism has been purged from Europe? Of course not! Racial discrimination is a reality. With the far-right consolidation, the prevailing everyday-racism only becomes official, right in the face of 21st century civilization. Thanks to Dutch and French electorate, there is a silver lining for proponents of coexistence and multi-culturism.