Peace in region not possible if Kashmir dispute not resolved: Mushahid Hussain 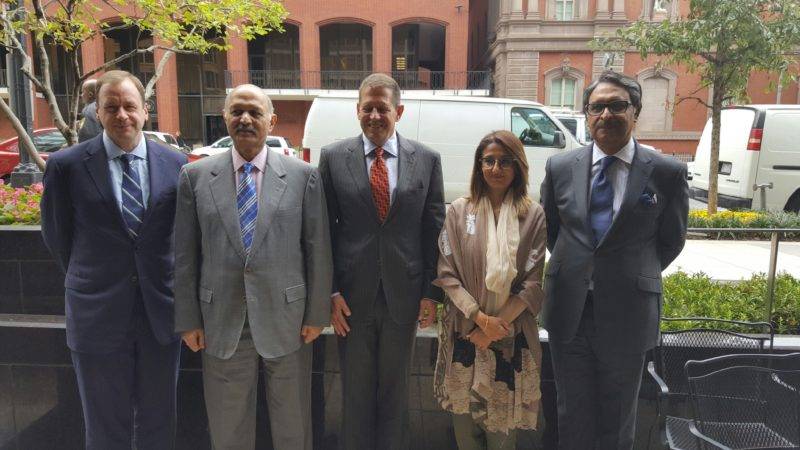 WASHINGTON – Prime Minister’s Special Envoy on Jammu and Kashmir Mushahid Hussain Syed, on a visit to the United States, submitted a dossier containing evidence of the atrocities carried out by Indian forces in occupied Kashmir to Special Assistant to President Barack Obama, Peter Lavoy.

In a program organised by the think tank Atlantic Council, Mushahid Hussain Syed met Special Assistant to President Barack Obama, Peter Lavoy on Friday where he briefed the latter about the situation in occupied Kashmir.

The envoy shared a documentary evidence of India's massive human rights abuses in the Occupied Kashmir and said that the reign of terror India has unleashed on the people of Kashmir.

The Special Envoys emphasized that turning of a blind eye by the international community particularly the U.S. on India's jingoistic and hegemonistic policies in the region risked great danger. They stressed that Jammu and Kashmir was the core issue and without its resolution there could never be a lasting peace in the region.

Asserting that the United States should respond to the present situation in occupied Kashmir in line with its rich political & ideological ethos and respect for human rights and national freedoms, Mushahid Hussain further demanded implementation of UNSC resolutions on Kashmir that called for a right to free and fair plebiscite to ascertain will of the Kashmiris on the pattern of East Timor.

“Kashmir issue is important. Without peace in occupied Kashmir it is not possible to have peace in the region,” said Mushahid Hussain

We [Pakistan] are observing a change in US diplomatic policy,” he added.

Hussain said every action has a reaction, and Pakistan felt the need to develop close ties with Russia after President Obama’s two visits to India.

“This was the start of a new chapter in Pakistan-Russia ties.”

“This U-turn of US policy can be traced back to the time of Bush administration when the US-India nuclear deal was signed which was against the law of non-proliferation of nuclear weapons,” said Hussain.

“Stability of Afghanistan and eradication of terrorism is a top priority of the US, which needs Pakistan to play a role in the peace-process. Pakistan is not only providing its assistance in the peace process but also facing damages,” stated the senator while addressing the audience.

The senator stated India can not violate the Indus Waters Treaty, as that will constitute an act of war.

“Apart from Pakistan and India, the World Bank is also a stakeholder in the treaty,” said Hussain.

The Envoys categorically rejected Indian allegations against Pakistan of supporting terrorism and highlighted that it was not humanly possible to breach the fence that India had erected throughout the Line of Control.

Commenting on the Uri attack in India-held Kashmir, Husain said, “UN military observer group for India and Pakistan should investigate the Uri attack. Crossing the Line of Control to attack any target in India is not possible for any militant.”

“India has indulged in state terrorism against Kashmiris and is simultaneously trying to divert international attention from the gross humanitarian and human rights violations in occupied Kashmir by falsely blaming Pakistan for the Uri attack,” he added,

The Envoys noted that the whole nation was united on our diplomatic, moral and political support for the Kashmir issue.