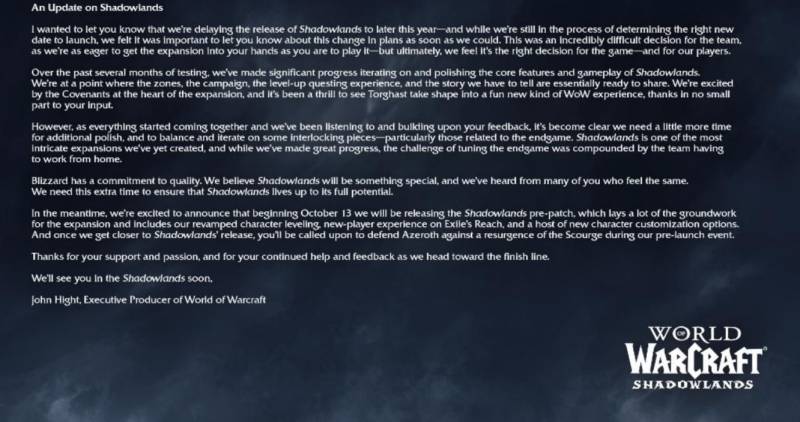 One of the most anticipated releases in the gaming world has now been delayed. Many fans of the MMORPG genre have been impatiently waiting for the next expansion in the World of Warcraft series, but, sadly, Blizzard Entertainment has now announced that the launch of the new expansion will be delayed till sometime later this year.

The reaction of the fans towards this news has been fairly mixed. Many fans have been outraged over the delay, but a huge portion of the WOW community has supported Blizzard in this decision. One of the major reasons for the delay is the lack of balance between different classes and specs in the upcoming expansion.

The community has been highly critical of Blizzard implementing highly complex systems within the game. Content creators who had beta tested the game almost unanimously agreed that THe Shadowlands was an unfinished product and that if Blizzard released the game later this month as previously announced, it would be delivering a broken game. Blizzard finally released the statement below stating that the expansion will now be delayed.

Blizzard has stated above that while many parts of the expansion are ready, the final product still needs polishing and balancing. Blizzard has also announced that it will be rolling out the pre-patch on October 13th which will introduce players to the new customization options and revamped levelling process. We will give you our first thoughts on the pre-patch as soon as we can, so follow us for more updates on World of Warcraft.