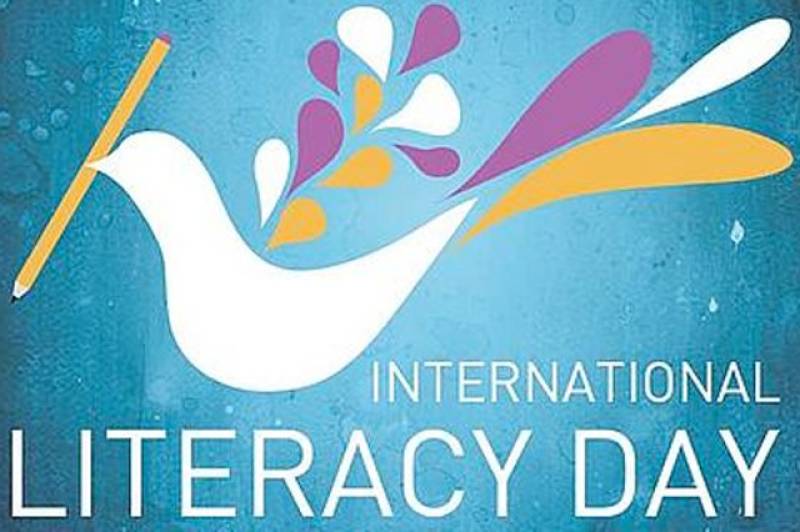 The theme this year is "Literacy and Sustainable Societies".

Literacy is a key driver for sustainable development.

Literacy skills are the prerequisite for the learning of a broader set of knowledge, skills, attitudes and values, required for creating sustainable societies.

At the same time, progress in areas of sustainable development, such as health and agriculture, serves as an enabling factor in the promotion of literacy and literate environments.

Free education is the right of every child in Pakistan, according to the Constitution of Pakistan.

But a recent survey points out that parents spend more than half their annual income in educating their children.

The overall cost of secondary education in private schools—the preferred choice of parents– constitutes 58.6% of the income of an average Pakistani parent.

The average per capita GDP is 150,000 with total educational expenditure of a household on one child up to 88,000 per year.

This shows that educating a child takes more than half of an average person’s income in Pakistan, according to a survey conducted by Alif Ailaan.

The much-talked-about article 25-A of the constitution guarantees that the state will provide free education to every child from ages six to 16. Despite that more than 5.5 million children in Pakistan remain out of school, states a report by UNESCO.

On World Literacy Day, we look at the emergence of the private sector in education and costs parents have to bear in the absence of the state— which has abdicated the responsibility of educating its children.

In the mid 1980s during Zia era, denationalization of schools started. This gave birth to the private sector in education which started off with doing a service to the state but ended up becoming a no-holds barred monster.

With parents being charged as high as Rs17,000 a month for primary education—one is left wondering over the sort of profits these schools are minting.

Many of these schools are run in bungalows— with no facilities for sports etc.– and even if they provide better quality education than government schools—they do not pay their teachers as well.

A primary school teacher in a government school earns at least twice as much as a teacher in an elite private school.

Two of the largest private school chains of the country is run like a franchise—and is owned by politicians who on television talk shows bemoan the dwindling plight of public education in the country—but fill their pockets by exploiting a gap in the market they are responsible for creating.

A survey by Alif Ailaan, for the private schools, 14% of the parents wanted a reduction in the tuition fees.

But felt that their choices were limited in the absence of quality education by the state.