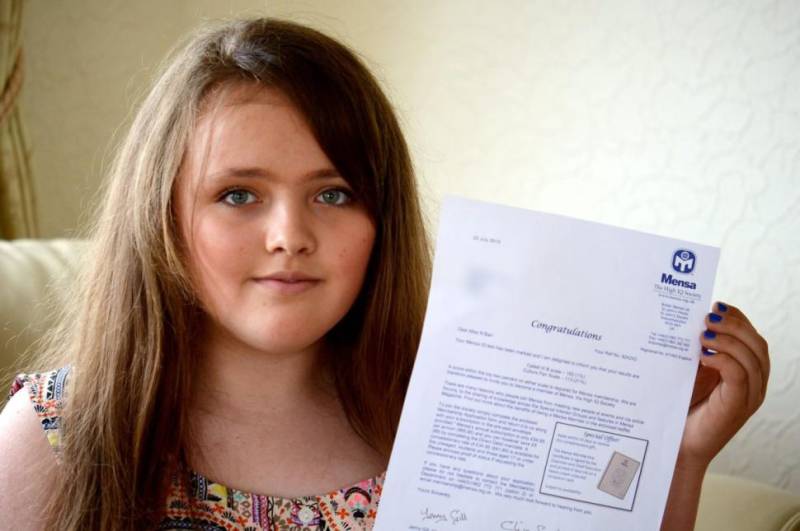 Nicole Barr of Essex aced her IQ test with a perfect 162 score, outsmarting such noted geniuses as Albert Einstein and Stephen Hawking.

The score places Nicole among the top 1% of the population. The average IQ score for adults is 100, and anything higher than 140 is considered genius level.

“When I found out I got such a high score, it was so unexpected,” Nicole told the Western Daily. “I was so shocked.”

She took the Mensa IQ test with her father James Barr, 36, who had a hunch she’d be accepted into the illustrious society, for intellects who score in the 98th percentile.

“She’s always loved numbers and puzzles, and she’s always been excellent at math, performing several years ahead of her age group in school,” Barr told Yahoo Parenting. “She likes challenging herself.”

Nicole lives in a Gypsy caravan with her father and baby half-sister. The proud father said her academic achievement has been the talk of the community, also known as Roma.

“It’s nice for us to be in the news for something good for a change,” Barr said. “This shows that it doesn’t matter where you come from, anyone can be academically brilliant.”

She was always more academically mature than her fellow peers in elementary school and she could calculate complex algebra before she was 10.

The preteen attends Burnt Mill Academy in Harlow, where she acts in school plays and aspires to be a doctor one day.

“Nicole is a brilliant pupil,” said Helena Mills, head of Burnt Mill Academy. “She works incredibly hard and has thrown herself into many different activities in her first year with us."

Only 110,000 members worldwide have been accepted into the exclusive Mensa society; 20,000 are from the British Isles, 35% of its members are female and only 8% are younger than 16.

“Only children can get a score higher than 161, because that is the maximum IQ score for an adult. The test is age-adjusted for children,” said Ann Clarkson, a Mensa spokeswoman.

Mensa said child geniuses are academically mature for their age, well-versed in a particular subject, have an incredible memory and prefer spending time with older people.