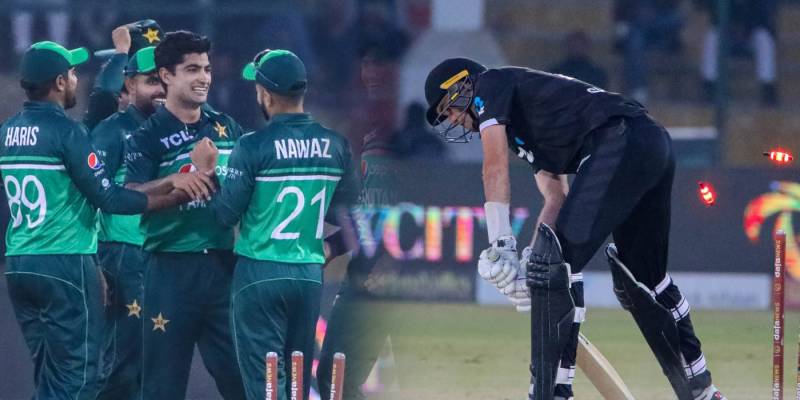 KARACHI – Pakistan on Monday beat New Zealand by 6 wickets in the first ODI in Karachi.

Captain and star player Babar Azam slammed a half-ton before Rizwan led Pakistan to a six-wicket triumph with his knock of 77 runs, as hosts were chasing a 256-run target.

Imam-ul-Haq returned early and Babar then supported Fakhar Zaman, who scored 56 runs off 74. Skipper then continued batting with Rizwan, but was returned in attempt to accelerate the innings.

On the other hand, New Zealand lost opening batter Devon Conway for a golden duck in the first over but manage to amass 255/9. After Conway's blow, Finn Allen gained momentum, until Mohammad Wasim Jr outfoxed him.

Top Latham scored 42 runs. Williamson and Daryl Mitchell added some runs before debutant Usama Mir got the Kiwi player with a stunning delivery. Mitchell made a 76-run partnership with Tom Latham.

Pakistan's Nawaz then makes a comeback, returning fourth Kiwi player. Pakistan then managed to get Latham’s wicket. Phillips and Bracewell then stitched 76-run to bring visitors back in the form.

After outfoxing Phillips, youngblood Naseem Shah got his hands on lower order as he removed Bracewell and Henry Shipley in consecutive deliveries. Shah then bowled Santner with a slower delivery to complete his second five-wicket haul in ODIs.

Besides Naseem’s five-for, debutant Usama impressed with two wickets for just 42 runs, while Nawaz and Wasim Jr struck out a batter each.

Earlier, Pakistan won the toss and decided to bowl first against New Zealand.

Shaheens and Kiwsi last locked horns in the 50-over format in the 2019 World Cup, with Babar-led squad clinching the contest by six wickets.

This time, hosts seeking to revive their cricket fortunes after a gloomy red-ball season while hopes are high for Team Green as they performed well in the 50-over format of the game over the last year, bagging eight out of nine matches.