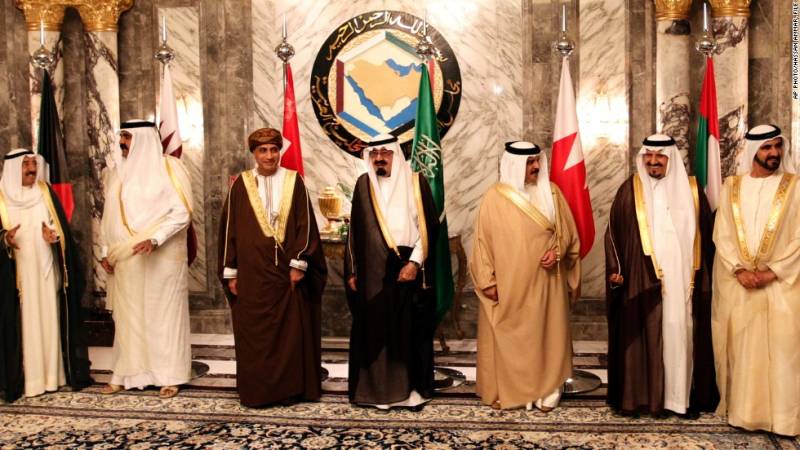 The Arab nations on the other side of the gulf are flexing muscle not against archrival, Iran, but one of their own kind. Today, a Qatar’s ruling member was included in a list - issued jointly by United Arab Emirate, Saudi Arabia, Bahrain and Egypt - of individuals allegedly nurturing close ties with terrorists.

United Arab Emirates, the most vocal and pro-active opponent of Qatar’s policies, closed its airspace for any flights destined to Qatar or flying from its airports, meanwhile. The earlier ban was limited to Qatar Airways alone. The Arab gulf states continue to hurt their ties as well as interests of friendly nations by imposing harsh restrictions. Though jealously defending its independent policies and defiantly opposing guardianship, Qatar has largely exercised graceful restraint, so far.

Some 5,000 kilometers away, Turkey’s Reccep Tayyip Erdogan fast-tracked a legislation authorizing deployment of the country’s military in Qatar. The two countries had in principle agreed to set up a new base during Tayyip Erdogan’s visit to Doha. In a bizarre twist to an already weird story, Ankara is sending 5,000 troops to Doha soon. The two sides believe that the deployment will deter any military adventure from the neighboring allies-turned-foes.

Qatar’s Foreign Minister Sheikh Mohammed bin Abdulrahman told Al-Jazeera in an interview Thursday that the contingent of Turkish troops set to deploy to Qatar was for the sake of the entire region's security. "There cannot ever be a military solution to this problem," he stressed.

Angered by Erdogan’s decision to stand by Tamim al-Thani, the Saudis have questioned his desire to mediate. After his return home, Emir of Kuwait Sheikh Sabah Al Ahmad Al Sabah briefed Erdogan of his tireless yet fruitless mediation efforts in a phone call on Wednesday night. The two countries have been connected on what can be called a 24-hour hotline to defuse the escalating row between Saudi Arabia, United Arab Emirates and Bahrain with Qatar. Strangely, the Turkish president did not take the initiative a fortnight ago when the rift began. He has reportedly sent a delegation to the Gulf nations’ capitals.

From fake news to authentic crisis

It all started with the alleged hacking of Qatar News Agency on May 24, disseminating a speech of Qatar’s Emir Sheikh Tamim bin Hamad al-Thani, claiming to be delivered at a military graduation ceremony.

The emir was purportedly lauding Doha’s good relations with Tel Aviv while voicing support for Palestinian organization, Hamas. The controversial news item also claimed that al-Thani even suggested US President Donald Trump might not last long in power due to legal issues concerning the Russia links.

Qatar vehemently denied the emir even speaking at the event. He just attended the ceremony, it clarified, while acknowledging successful hacking of the QNA website.

The ‘fake news’ had already angered the neighboring Gulf nations as well as Egypt. The Qatari clarification or denial was ignored by the four countries, which officially kept mum as their state controlled media aggressively attacked the Arab leader. The vicious media campaign, which has been intensifying by the hour, spared no one in the Qatari ruling family as well as cabinet members.

Meanwhile, three neighboring countries (Saudi Arabia, UAE and Bahrain) and Egypt cut off diplomatic relations while banning Qatar Airways operation in their respective countries, closing their airspaces for Qatar besides giving 14-day notice to its citizens to leave the country. As if the actions were not punitive enough, an economic embargo was also imposed, thus denying vital supplies of water, food and medicine to name a few.

No smoke without fire?

Qatar is known to have soft corner for pan-Islamist political party, Muslim Brotherhood, which is banned in most of the Arab countries except Jordan and Morocco. Erdogan, who subscribes to the ideology of Al-Ikhwan Al-Muslimeen, also enjoys very close ties with the Qatari ruling family.

Moreover, it has tried to establish Doha as the center for conflict resolution for the Muslim world as well as Africa. The country has been involved in peace negotiations between warring factions of Sudan, Somalia and even hosts political office of the Taliban.

Qatar has already expelled dozens of figures deemed controversial or a threat by the neighboring GCC states. The allegations of supporting Ikhwan and Hamas to destabilize Egypt and serving base for Shiite unrest in eastern Saudi Arabia brought newer dynamics to the entire gambit. While officially no claims of sharing proofs has been made, social media outlets have been used to build a perception against Qatar. The tiny energy-rich state has faced the nasty campaign with grace and restraint, with the government advising citizen not insult other countries or leaders. Even if the row ends, Doha will need a consorted effort to undo the damage done to its repute by labeling her the ‘financier and protector of terrorists’.

Tayyip Erdogan and Donald J Trump, both the leaders with significant leverage in the Arabian Gulf, hastily took sides early in the crisis.

Ankara initially called for the Gulf unity and readiness to help however it can to bring the disputes to a manageable level. Foreign Minister Cavusoglu also said: "Turkey sees the unity and solitary among Gulf states as our own unity." Given the aggressive posturing against his closest ally, Erdogan firmly stood behind Qatar while still offering help in resolving the crisis.

While Qatar hosts Washington’s largest military base in the Middle East - housing 10,000 troops and their wherewithal – Trump did not hestitate to public admonish her in sync with the line adopted by the UAE and Saudi Arabia. He tweeted: "They (Muslim Countries in Riyadh) said they would take a hard line on funding extremism, and all reference was pointing to Qatar. Perhaps this will be the beginning of the end to the horror of terrorism!"

During my recent trip to the Middle East I stated that there can no longer be funding of Radical Ideology. Leaders pointed to Qatar - look!

...extremism, and all reference was pointing to Qatar. Perhaps this will be the beginning of the end to the horror of terrorism!

Anwar Gargash, UAE state minister for foreign affairs, said: "This is not about regime change - this is about change of policy, change of approach."

As the military remains on the highest alert to preempt any attempt to invade Qatar or remove of the emir through intrigues, the key to crisis lies with Kuwait’s Emir Sabah who enjoy enormous respect in the GCC ruling families. He has wealth of experience and personal reportage for serving his country as Foreign Minister for 40 years (from 1963-2003).

When Dr Mohammad Morsi won the election in Egypt and took power in Egypt, a similar but less tense situation arose between Qatar and its neighbors. Eventually, Qatar had to face diplomatic isolation for eight months in 2014. Emir al-Sabah acted mediator then as well. After initial lack of breakthrough, the Kuwaiti emir has not given up. He is still shuttling between Abu Dhabi, Riyadh and Doha. Much needed support from Washington came but typically late and with sour taste. Trump's reconciliatory tweet has failed to put out the fire his previous comment added fuel to. Moreover, Emir of Qatar has declined to leave Doha for travelling to Washington on his invitation. The best White House can do is convince the UAE of restraint which has taken the most extreme steps so far. Tayyip Erdogan’s decision to send troops makes Turkey controversial for Saudi Arabia, Bahrain and the UAE. Yet it can act as deterrent against military invasion.

Searching for a ray of hope

French President Emmanuel Macron can help diffuse tension too for his country has a sizeable base in Oman. While the US diplomacy remains uncertain and the British political disarray offer no hope, Paris can come forward to fill the void. The Saudi defense minister is already visiting Germany today while Qatari foreign minister flies to Russia. Tehran and Moscow will be true beneficiaries of a prolonged strife. Not only will Iran able to replace Saudi Arabia as key supplier of food, water and other necessary commodities while dent the GCC unity by creating dependence. For Russia and Iran, other gains include surge in oil prices as well as deepening fault lines amongst rebels opposed to Bashar al-Assad. The Syrian tyrant can survive in Damascus due to heavy Russian airpower, scores of military advisors, Iranian troops and paid mercenaries.

Though caught in Panama Leaks, Prime Minister Nawaz Sharif too has personal relations with the four GCC nations. His active diplomacy can strengthen Emir al-Sabah’s efforts.

Conflict in the Gulf region will spell disaster for many Muslim countries like Pakistan. From foreign policy to energy security, the odds will be stacked against Islamabad. Besides skyrocketing energy prices, the country will have to withstand return of hundreds of thousands of expatriate employed in UAE, Bahrain, Qatar and to an extent Saudi Arabia. Not only will their return would add burden on economy but valuable remittances will also get a serious blow.

It’s time for Prime Minister Nawaz Sharif to rise to the occasion and fly to Riyadh, Abu Dhabi and Doha. He has personal relations with the ruling families for decades. His active diplomacy can strengthen Emir al-Sabah’s efforts for stability and unity in the Gulf region. Though wedged in Panama Leaks probe, his statesmanship can serve stability in the region and reinforce Pakistan’s stature as a friend in need besides rehabilitating some of his lost political clout.