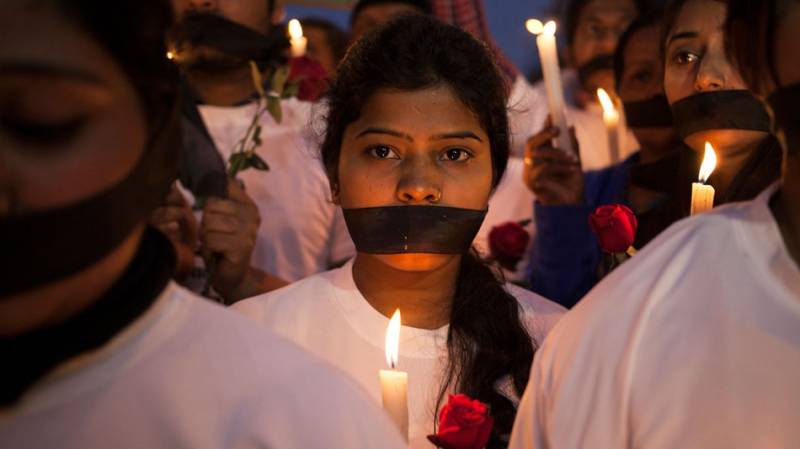 DELHI (Web Desk/ Agencies) - A TV station in India took a stance after it was banned from showing a controversial documentary about a fatal gang rape in New Delhi.

NDTV on Sunday night was due to show India's Daughter, produced by the BBC, but Indian authorities intervened and halted the broadcast.

However, instead of scheduling other programming, the station went dark for an hour, broadcasting only a slate with the documentary's title in red and white, below it a strap line with reactions from well-known Indians to the banning and statistics about rape in India.

Editorial director and anchor at NDTV explained the decision in a tweet:

India's Daughter, by British filmmaker Leslee Udwin, was released on British television and online Wednesday night — days earlier than scheduled — after the Indian government attempted to block its screening with a restraining order and a letter to the broadcaster.

The documentary looks at the gang rape and murder of 23-year-old medical student Jyoti on a bus in Delhi in 2012 and the protests that followed.

Indian officials were outraged by clips from the documentary in which one of the convicted attackers blames the victim for the horrific crime. Authorities have said the film is a global conspiracy to defame the country.

On Thursday, the film was taken down from YouTube and users who uploaded copies of the documentary were blocked.

The film, produced as part of BBC's Storyville series is available until March 15 on the BBC iPlayer but can only be accessed by those inside the UK.